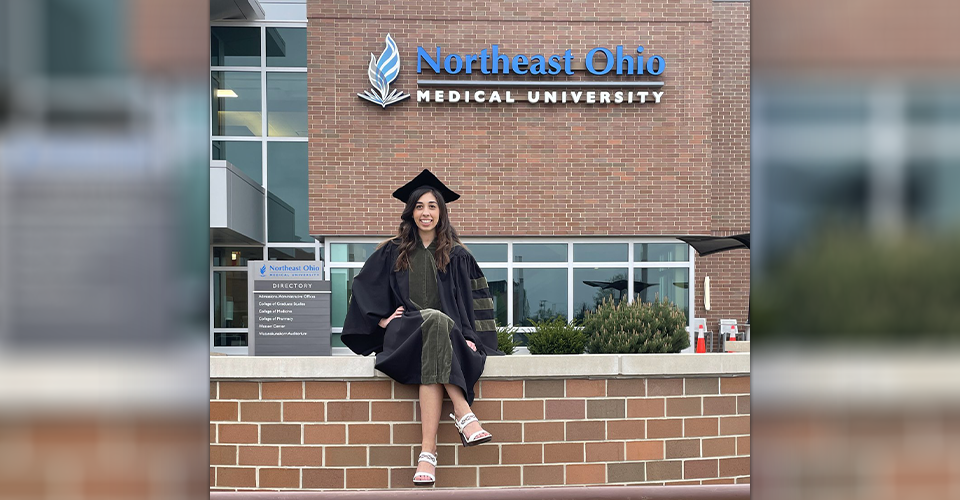 Maria Ganios found her path to pharmacy in sunny Greece.

Growing up in North Canton, she always knew that a career in health care was in her future. Her mother had a medical degree (which she set aside to raise Maria and her five siblings – including sister Natalie, a third-year medicine student at NEOMED). Two siblings went on to become dentists.

While Ganios knew that she wanted to go into some aspect of the health care profession, she had a caveat: “Blood made me a little bit too queasy, so I knew that there were certain areas in the health care field that weren't necessarily for me.”

But when she visited family in Greece and observed her cousin at work in the pharmacy that he owns, she saw exactly what a pharmacist does—and liked it. (And no queasy stomach!)

Back at home stateside, Ganios shadowed a couple of local pharmacists and decided she had found her future career. That notion was reinforced during coursework in biochemistry as she pursued her bachelor’s degree at the University of Akron.

Earlier this month, Ganios took an even bigger step into her career as a pharmacist, crossing the stage as student marshal and Gonfalonian (top of her class) for the College of Pharmacy at NEOMED’s Commencement.

Being close to her family in North Canton was important to Ganios when selecting where to study. But that’s not the only reason she chose NEOMED’s College of Pharmacy.

“Even before my interview, I met individuals that graduated from NEOMED. And they would always say something like, ‘Oh, you're not just a number here. You're like part of the family,’” Ganios recalls. “Once I walked out of my interview, I understood what they meant. I was like, I already feel like I'm a part of this College and I could see myself being a part of this whole community.” Ganios was an active member of several campus organizations, taking a leadership role with the Student College of Clinical Pharmacy. She was inducted into the Rho Chi Pharmacy Honor Society.

When Ganios begins her PGY-1 residency at University Hospital's Portage Medical Center, the new graduate will make good use of the experience she gained working as part of an interdisciplinary team volunteer at the Student-Run Free Clinic at NEOMED. It’ll be a return to the center where Ganios completed her final rotation.

“There are definitely amazing people there. I'm really excited to work with them again,” she said.