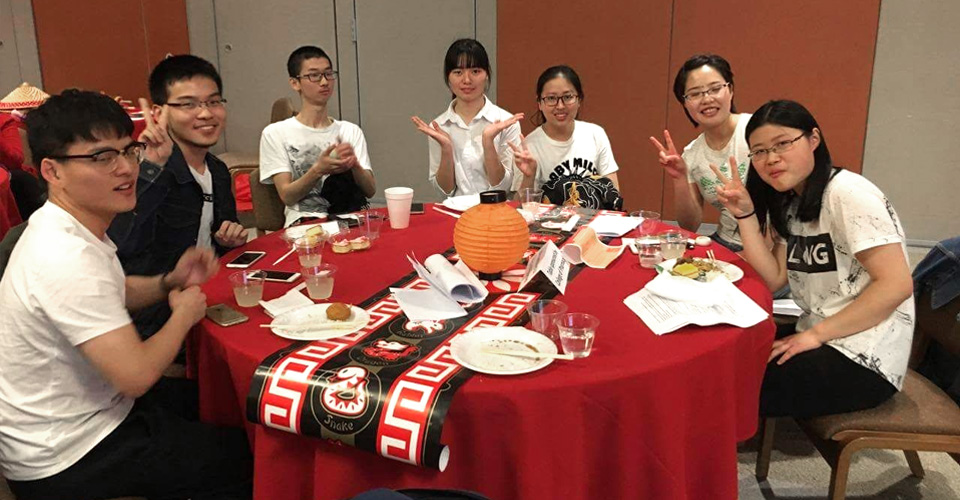 Did you watch the Super Bowl with your family or friends? There was Lady Gaga standing on the roof of Houston’s NRG stadium, framed by a fleet of illuminated drones swirling in the sky behind her. It was really cool. If you think 115 million people tuning into the Super Bowl was a lot, try six times more than that: 700 million people watched China's live five-hour long Lunar New Year TV gala, according to China's state television network.

Chinese New Year was on January 28, 2017 and marked the turn of the traditional lunar calendar. Every year, almost all Chinese head home to be with their families to eat, drink and celebrate, no matter where they are on that special holiday. However, my five classmates from Anhui University and I experienced a different Lunar New Year at NEOMED this year, because we were invited to take part in the NEOMED Lunar New Year Festival as performers and audience members.

The celebration was held Jan. 25 in the Great Hall. Members of the Asian Pacific Medical Student Association organized this activity and decorated the hall with many Chinese-style adornments. They prepared some interesting games and videos. I was responsible for the presentation on the Chinese Lunar New Year, which involves lots of Chinese traditions, culture and customs. My classmate Clark did his part in a humorous atmosphere; Alan and Grace made an exquisite PowerPoint to introduce Anhui Medical University and our experience in America these days. Wang, Grace and Sophie rehearsed again and again to prepare. We valued it highly because it was a good chance to exhibit modern China and to spread profound Chinese culture and the special meaning of the Lunar New Year.

We were a team for the performance of Tai Chi, which is a kind of Chinese martial art originally developed for self-defense. Tai Chi has evolved into a graceful form of exercise that's now used for stress reduction and a variety of other health conditions.

It was amazing to enjoy a different Chinese New Year celebration with delicious Asian food and interesting programs. I wish you all good health in the new year!

-- Xiaoqian Lu, also known as Molly is one of seven students from Anhui Medical University in Hefei, China, who are participating in an educational exchange with the NEOMED College of Pharmacy this year. Molly and her Chinese classmates, Xue-chao Huang (Alan), Hao Wu (Chris), Qi Sun (Clark), Hui-jie Fue (Grace), Yang Liu (Sophie) and Yi-wei Wang (Wang) were excited to share their culture with faculty, staff and students by presenting and performing at NEOMED’s Lunar New Year Celebration.