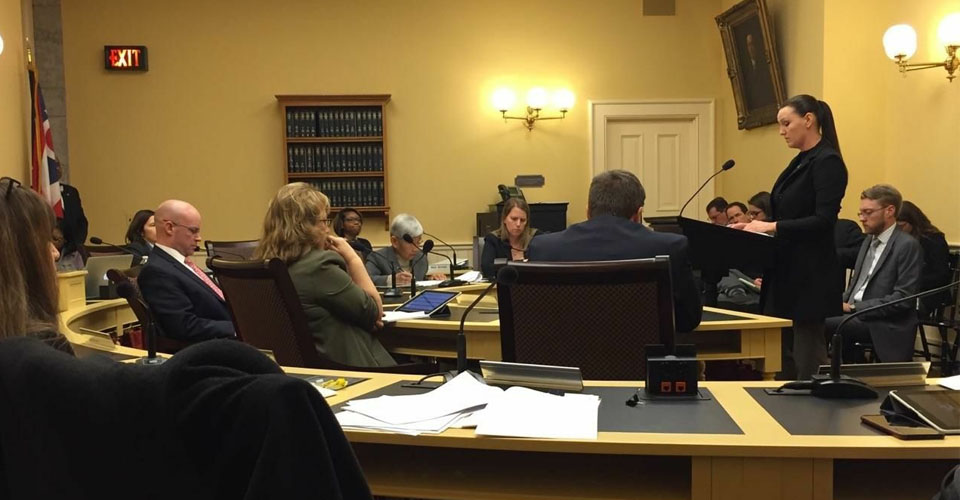 Being involved in an abusive relationship can lead to mental health conditions such as anxiety and depression. NEOMED Cares is a campus-wide campaign led by the Mental Health Committee to promote awareness of mental health and wellness resources, educational opportunities and access to help throughout the campus community.

Did you know? One program operated statewide from NEOMED is the Ohio Program for Campus Safety and Mental Health. The program promotes mental health awareness, suicide prevention and stigma reduction activities at NEOMED and other campuses across the state.

Many of us dread Sunday evenings, because Monday means preparing to return to work or school. NEOMED police officer Kelly DiBona, on the other hand, holds Sunday evenings close to her heart.

For years, Officer DiBona held the Sunday evening shift at Safer Futures, a domestic violence shelter and resource center in Portage County—the same shelter where she stayed with her mother when she was a child.

After hearing those stories and watching her mother suffer through an abusive relationship for more than a decade, Officer DiBona wanted to do something to help women like her mother. The opportunity presented itself in October 2015, when Officer DiBona met Emilia Sykes, Representative for the 34th district of the Ohio House of Representatives, during a panel interview at Northeast Ohio Medical University. Soon afterward, the two decided to join forces as advocates for domestic violence.

Before Officer DiBona, Rep. Sykes and Nathan Manning, Representative for the 55th district of the Ohio House of Representatives, pushed for bipartisan passage of H.B.1, Ohio was one of the last two states “to allow victims of dating violence to obtain civil protective orders against their attacker”—the same protection against violence as those who are living together or married. (Georgia is now the last state awaiting updated terminology.)

The process of patience

It took some doing. Officer DiBona testified at hearings in 2015 and 2017, then submitted a written testimony later in 2017. House Bill 392 made it through the House but failed in the Senate vote. But Reps. Sykes and Manning persisted. With patience and the right timing, the team was able to see a new version, House Bill 1, through to success.

It was a long road, says Officer DiBona, but three testimonies later, she can proudly say she played a role in this important and much-needed update.

“I think this is extremely important just because it opens up another avenue for someone to gain an extra layer of protection. The new law means that law enforcement responds completely differently. It escalates the situation and mandates that there is an extremely immediate need for us to be there to help that person out,” says Officer DiBona.

As someone who has lived in a home with domestic violence and now as a law enforcement official, Officer DiBona knows the territory better than most.

Now people in a dating relationship, like that woman, have more protection.

With House Bill 1 in place, Officer DiBona continues to be an advocate throughout her community to help reduce domestic violence. Through Crisis Intervention Training (CIT) and Crisis Intervention Team Education Collaboration (CITEC), Officer DiBona educates local educators and law enforcement officials, using her personal experiences to help them recognize and address children or adults who are experiencing domestic violence. She’d like everyone to feel the safety and warmth she saw at the shelter on those Sunday nights.

This article first appeared in the Fall 2018 issue of Ignite magazine.