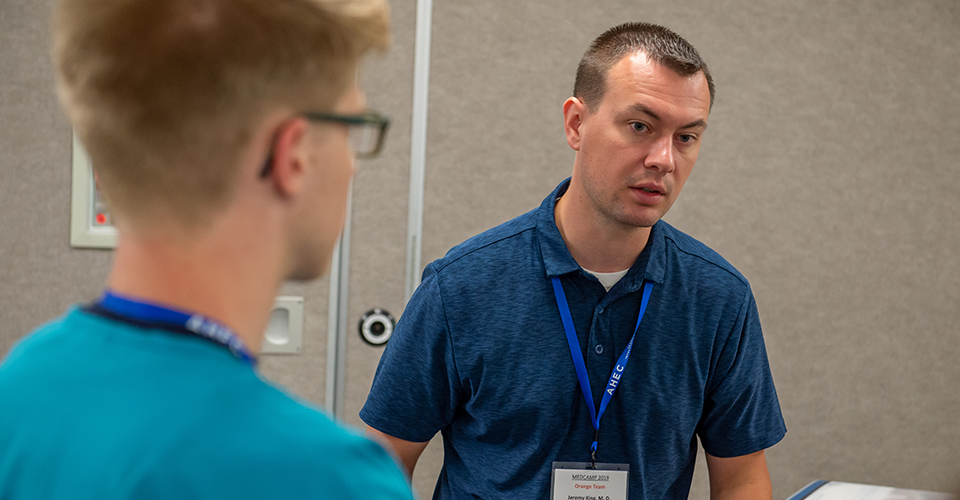 Making His Way Back to MEDCAMP

Fifteen years ago, a rising ninth grader from rural Garrettsville took his science teacher’s advice to enroll in MEDCAMP at NEOMED. Now a graduate of the College of Medicine and a practicing physician, Jeremy King, M.D. (‘15), sees MEDCAMP as a rare opportunity for students of underrepresented areas to explore options in the world of medicine.

Growing up in Garrettsville, Ohio — a town about 20 miles away from NEOMED – Dr. King didn’t have many opportunities to explore careers, so he remembers being thrilled to hear about the summer session.  “I was so excited when my eighth-grade science teacher, Mrs. Lippert, announced the opportunity to our class. Little did I know how much it would change the course of my life,” he says.

Dr. King has remained loyal to the program. In 2012, as a NEOMED College of Medicine student, he assisted as a MEDCAMP student mentor. Now employed as an emergency room physician at Salem Regional Medical Center in Salem, Ohio, Dr. King returned to MEDCAMP once again earlier this month — this time, as a physician adviser.

“Fifteen years later, I still think that MEDCAMP cultivates the same sense of wonder and awe in students as it did for me when I was first introduced to it in 2004,” says Dr. King.

MEDCAMP director Patti Thornborough, says that’s what MEDCAMP is about: “Giving those students who are from underserved areas a chance to engage in programming that will make them realize their potential to come back to NEOMED as a medical student.”