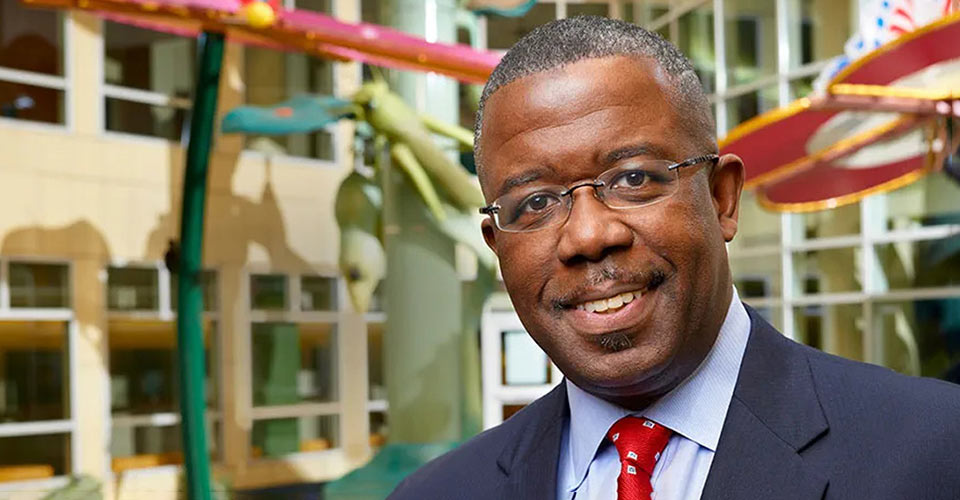 It’s easy to pick out Edward Barksdale Jr., M.D., when he shows a photo of his 1960s elementary school class in Lynchburg, Virginia. He’s the only Black child present, and that’s due to the success of his parents in integrating the school system. In a presentation on NEOMED’s VITALS series Dec. 2, the Harvard Medical School graduate talked about how his grandmother’s approach to adversity propelled him as he grew up. From the many questions that the webinar audience asked afterward, it was clear that Dr. Barksdale’s experiences resonated strongly with listeners.

Now the Surgeon-in-Chief at University Hospitals Rainbow Babies & Children’s Hospital in Cleveland and president of the American Pediatric Surgical Association, Dr. Barksdale didn’t sketch a one-dimensional tale of a climb to the top.

More than once in his presentation, Dr. Barksdale dismissed notions as “Pollyanna-ish,” a reference to a character in a 1913 book who became synonymous with an annoyingly persistent (and unrealistic) optimism. Realism is not surprising for a man who grew up in the birthplace of Jerry Falwell’s Moral Majority – a place where Dr. Barksdale’s family was threatened because of their advocacy of equal rights in the form of school integration.

Asked about his experience entering Yale University, Dr. Barksdale confided to the VITALS audience that initially, “I was really scared.” His mother was a seamstress in a sock factory. His dad didn’t finish high school (though he went on to become the vice mayor of Lynchburg—yet another surprise to assumptions). But the young man found his place in the Ivy League, becoming an All-American fencer and discovering plenty of “other dreamers” like him –including a roommate’s girlfriend, Maya Lin, who went on to design the Vietnam War Memorial.

The challenges came later, after Dr. Barksdale had graduated from Harvard Medical School. The higher he rose in his profession, achieving such impressive “firsts” as being the first Black pediatric surgeon hired at Massachusetts General Hospital, the fewer allies he found, said Dr. Barksdale.

So, he doesn’t see life as easy, but throughout it, he has drawn on the advice of his wise grandmother to think about adversity as a natural part of life – and something you can do something about. People can grow and develop leadership skills if they look at adversity as an opportunity to learn, he said, sharing some life lessons from his own family:

Cultivate the strength of your own identity, rather than paying attention to what makes you different, and look for sponsors as well as mentors, Dr. Barksdale told current and future health professionals in the audience—good advice for anyone, especially those seeking to become transformational leaders like him.

Following the usual VITALS format, the second part of the hour-long program was devoted to answering questions from listeners, facilitated by guest moderator Betty Lin-Fisher, medical reporter for the Akron Beacon Journal.

“Violence, violence and violence,” Dr. Barksdale said, noting that structural violence is at the root of health care problems in Northeast Ohio. As he explained, structural violence covers a variety of issues – including the way that dangerous neighborhoods contribute to obesity in women because it’s not safe for them to walk in them.

For more from Edward Barksdale Jr., M.D., listen to the full recording of the Dec. 2 VITALS presentation or view his slide deck.

The next VITALS on Jan. 13, 2022, will feature Scott Knoer, Pharm.D., executive vice president and chief executive officer of the American Pharmacists Association.