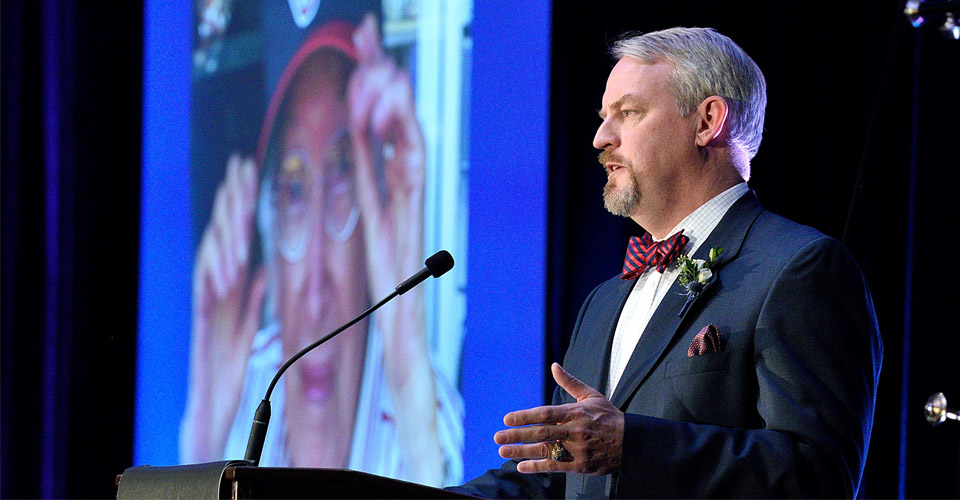 The Margaret Clark Morgan Foundation, the largest mental health funder in Northeast Ohio and a major supporter of NEOMED, has a new name. It’s now called Peg's Foundation, after the nickname its late founder preferred.

The soft rose shades used in the foundation’s earlier brand reflected Morgan’s gentle personality, said its longtime president, Rick Kellar, shown in photo. So did the use of an American Dogwood, Morgan’s favorite flower, in the logo. Yet years ago, this mother faced daunting challenges obtaining care and services for her son Dave, who had schizophrenia. (Now an adult, he is thriving in a group home.) Even with the wealth she shared with her husband, businessman Burton D. Morgan, she could not easily provide for her son’s mental health needs at a time when such needs were poorly understood, and services were scarce. Helping Dave took great perseverance and determination.

The bolder new colors of the new brand reflect Peg Morgan's determination and quiet ambition, says Kellar, who tells of a board meeting at which she said little but jotted a memo to herself.

Her message was this: Think bigger. Those words have shaped her foundation.

Kellar says that Peg Morgan, who died at age 95 in 2013, had bright hopes for the foundation, which began in 2001 and operated independent of her husband’s Burton D. Morgan Foundation, which is also located in Hudson, Ohio. With the rebranding, the mission remains the same—to improve the lives of people with serious mental illness by investing in innovative projects in Northeast Ohio having national transformational impact. It will continue to promote mental wellness, the arts and education through its grants.

The Foundation has moved ahead with its goal of thinking bigger—beyond Northeast Ohio—to pursue a national reach through grants and initiatives. Believing that philanthropic support in the area of policy is critical to improving the health outcomes for all, Peg’s Foundation partnered with The Thomas Scattergood Behavioral Health Foundation to  commission a series of papers that address ways to continue and protect the recent progress of behavioral health policy. After publishing the papers, the two foundations’ leaders presented three of them in Washington, D.C., in 2017 to advocating for mental health reforms in areas including the criminal justice system and opioid/fentanyl epidemic.

“We had about 70 senior Senate and House staffers packed into a room over at the Capitol,” says Kellar, noting, “Unless you look them in the eye, hand them a paper and make your compelling 30-second argument, they’re on to the next thing.’’

Mark Munetz, M.D., the Margaret Clark Morgan Endowed Chair of Psychiatry at NEOMED co-authored one of the white papers, titled “Improving Outcomes for People with Serious Mental Illness and Co-Occurring Substance Use Disorders in Contact with the Criminal Justice System.”

More than a laboratory

At some institutions, thought leaders publish their ideas in journals or books that may then get put on the shelf, says Kellar.  It’s enormously satisfying to him that at NEOMED, the psychiatry team will say, “Here’s a better evidence-based practice of how to treat somebody with schizophrenia” and then put it into practice at behavioral health agencies and facilities throughout the region—implementing change that normally takes decades to achieve.

Peg’s Foundation has been the biggest funder in NEOMED’s history. As the NEOMED Foundation marks the final six months of its Shine On campaign, Kellar applauds the University for its achievements in broad-ranging mental health initiatives.

“We’ve got a generation of medical students who are exposed to psychiatry and behavioral health’s illnesses and challenges who are graduating from NEOMED and who are more likely to stick around our area [Northeast Ohio]. Without Dr. Munetz and the department working the way it is, that wouldn’t be happening.”

Dr. Munetz accomplishes his goals unassumingly but extraordinarily effectively, says Kellar, who isn’t surprised to learn of yet another recent example of the professor’s innovations on campus: He and his department organized panel discussions at which students and faculty were invited to talk about their personal experience with mental health concerns.

“He has so much going on. That’s a third thing that excites me about our partnership with NEOMED and the Department of Psychiatry, and Mark Munetz in particular: you can’t even keep up with the number of programs and initiatives—and the difference that this one person and his team is making. As a funder in philanthropy, that’s the leverage you’ll always hope for, in a grant partner. What we hoped to fund at the Best Practices in Schizophrenia Treatment (BeST) Center the first and second time, and of course by funding the chair of psychiatry—so much more than we originally agreed to has happened. It’s a highlight for us,’ says Kellar.”

“Somewhere else in the nation there may be another NEOMED out there, but I’ve traveled around a lot and I haven’t found it yet.”