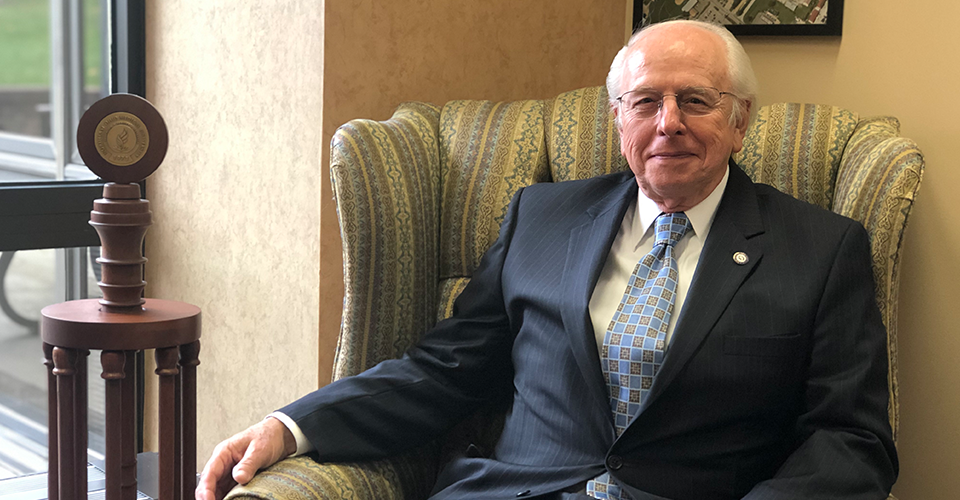 After years in the trenches, successfully negotiating with government officials and advocating at the highest levels of research institutions, you might expect that Rich Lewis would have a few psychological techniques that he pulls out to win support for NEOMED.

Lewis, who will retire on Dec. 31 from his longtime role as NEOMED’s vice president for external affairs and secretary of the Board of Trustees, is a look-you-in-the-eye kind of guy who always prefers to talk in person. “I’m a face-to-face person,” he says. And you can count on Lewis to take time at the beginning of any business conversation to ask with genuine interest, “How are you? How is your family?”

“My contract is my word and a handshake,” says Lewis, who prefers to be called Rich instead of Richard unless it’s a formal setting.

And the way he builds relationships, and trust, is over time.

It has become accepted knowledge that people gradually begin to recognize or embrace new concepts or products after repeated exposure. For Lewis, that begins the first time he sets out to get to know someone new. Let’s say there’s a new state senator. Lewis makes the call himself to make the appointment to meet. By doing that, he begins building a relationship with the assistant or aide who sets appointments. “Those jobs turn over, and the person who’s the receptionist today may be the health affairs aide or chief of staff in a couple of years,” Lewis says.

“It’s got to be sincere. People know when it’s baloney,” Lewis quickly adds. But his goal is to be as open and kind as possible. The result? Later, when the new senator and their assistant are chatting and the assistant recalls their interaction with Lewis, things will go more smoothly if he treated them with respect – not as a stepping stone to the person in power.

When Lewis travels to Columbus or Washington, D.C., it may be to work with elected officials to advocate for a NEOMED-related project or initiative. Doing your research ahead of time and knowing as much as possible about the person with whom you are meeting is crucial, says Lewis. (Asking a senator to support a cheese tax if she’s from Wisconsin may not pan out.)

But if a government official has told him about a family member struggling with a disease that needs research funding, they may listen with added interest to a proposal for universities to receive more state support for research. Go around the table of any given group of people, and you’ll discover that one may have a family member or close friend who is having a problem with mental health, while another may have a family member who is having difficulty with Alzheimer’s or Parkinson’s or cardiovascular disease. Remembering to approach people with an appreciation for their own personal lives has served Lewis well, he says.

Whether working with Congress, the Ohio General Assembly or talking with major research funders like the National Institutes of Health or National Science Foundation, Lewis often takes the role of facilitator. “I like to guide the conversation. My job is to draw out our own folks in those conversations to allow them to talk about the importance of their own research,” he says. And by getting to know administrators who are overseeing the programmatic criteria for the next round of research grants, Lewis helps NEOMED researchers identify opportunities earlier.

What if a conversation isn’t progressing and the elected official just doesn’t seem interested? Lewis doesn’t talk more. He stops to ask questions: “Does that make sense to you?” “What do you think?” And he looks to find common ground. For example, researchers working in NEOMED’s REDIzone® have a goal of commercializing their projects. The state of Ohio supports projects that help economic development. So, when Lewis can work with researchers to help translate the value of their work and the state knows that others are supporting this effort, which will have a multiplier effect on economic development – well, that’s a pretty good case for funding.

Lewis breaks down a few principles of building a successful case:

Rich’s Rule of 72 and other relationship takeaways

In a presentation to this year’s Fellowship in Academic Medicine (FAME) Leadership Track cohort, Lewis talked about how to build relationships that are so strong that people will support your case even when you’re not in the room.

And always remember to be kind.