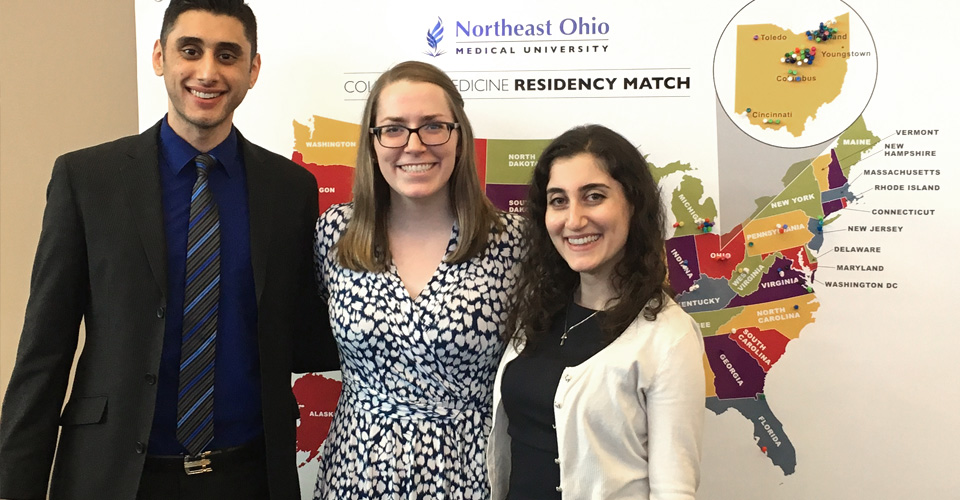 Each year, a national rite of passage called Match Day happens, combining the tension of the Oscars with the emotion of Commencement. Starting at noon EST March 17, fourth-year medicine students across the country learned the news of where they had placed for their residency. At Northeast Ohio Medical University, a standing-room-only crowd packed the NEW Center’s grand ballroom to learn the fates of 139 fourth-year students from the University’s College of Medicine.

“Mama, this is for you.’’ Student Omar Mostafa’s words captured the nervous but grateful mood in the room as one by one, fourth-years approached the podium and opened an envelope to find out what their next step would be.

The envelope holding the news for each student was ordinary. Their stories are anything but, and the music each person chose as their theme song to carry them to the podium showed as much personality as their attire. (Yes, we noticed those red sequined shoes!) From The Next Episode to Stayin’ Alive, from You Can’t Always Get What You Want to the fireworks finale to the 1812 Overture, the tunes set the tone for each person’s way of coping with their nerves before the big news was revealed to family and friends.

Many students stood close to their beaming (or teary) significant other on stage—some even allowing them the honor of opening the envelope. Sarah Rogers brought her husband and six children to the podium to learn the news that she had matched in anesthesiology at Cleveland Clinic Foundation.

Nick Boniface and Julianne Matthews revealed they had become engaged earlier in the day, and both discovered they will be serving their residencies in Columbus—Boniface at the Mount Carmel Health System for general surgery, Matthews at the Ohio State University Medical Center for ophthalmology.

Erin Ohlinger, who shared that she would be getting married the next day, had to wait through the whole ceremony before being called to open the last envelope. She was thrilled with the news that she will be serving in orthopaedic surgery at the Cleveland Clinic.

Nationally, 94 percent of U.S. applicants matched, according to the Association of American Medical Colleges. While NEOMED mirrored the national average, it placed an additional 5 percent through a supplemental program. As a result, 99 percent of NEOMED students were placed.

Overall, 45 percent of the Class of 2017 will serve residencies in primary care, with 11 percent in surgery and 44 percent in other specialties, such as emergency medicine, psychiatry and radiology. Nearly half of the class will be staying in Ohio, fulfilling NEOMED’s mission of training health care professionals for and from our region. Akron Children’s Hospital, Cleveland Clinic Akron General, Case Western MetroHealth, Case Western/University Hospitals Medical Center and Summa Health were all represented in this year’s Match Day.

A residency match map demonstrates NEOMED’s commitment to Ohio—and the geographic representation of NEOMED from coast to coast. Mansur Assaad, Melissa Wise and Stephanic Saed were among the many posing for photos at the reception following the event.