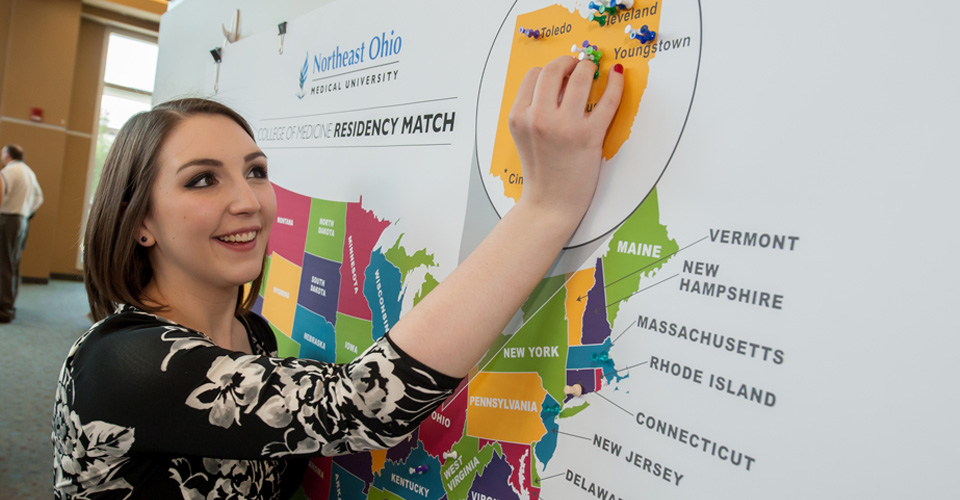 Excitement and a new, more private reveal marked the 2018 Match Day for College of Medicine students. Friday, March 16, students, family, friends and members of the NEOMED community gathered in the Grand Ballroom to learn—along with students across the country—where fourth-year medicine students had matched for their residencies. A total of 139 NEOMED students matched in locations near and far, starting with placements that fulfill the University’s mission of ‘’from Ohio, for Ohio’’ and also ranging from California and Washington State to Maryland, Massachusetts and New York—not to mention Florida, Tennessee and Texas.

To build the drama and fun of an already-exciting day, 10 alumni led by Joseph Zarconi, M.D. (’81) stood one by one to announce their name and graduation year in a countdown to the nationally designated hour of noon. At that time, documented by video feeds, students exited the Ballroom to pick up their envelopes and privately open them. Groups huddled around individual students to cheer them on as they ripped open the documents holding their next step.

Shouts of excitement, tears of joy and laughter followed, and then anyone who wanted to announce their results was able to take turns coming to the front of the ballroom, accompanied by celebratory music that they had chosen, to share the news. Among the grateful thank-yous to family and friends, Aldrin Alpuerto touched on a common theme when he thanked his parents for giving up their dreams so that he could pursue his. He matched in thoracic surgery at University of Washington Affiliate Hospitals in Seattle.

“I love you more than anything. Today is yours,’’ said Carisa Bohnak to her family. She matched in ophthalmology at Vanderbilt University Medical Center in Nashville.

One of the happy couples taking the stage together was Amythest Gauthier and Daniel Kreatsoulas—the gonfoloian, or top-ranked student, in the Class of 2018. They will head to The Ohio State University Medical Center, she for family medicine and he for neurological surgery.

Several students juggled young children on their hips or walked them onstage. One little girl managed to whisper, “Omaha, Nebraska,” into the microphone. That’s where Bryant Van Leeuwen will complete a urology residency.

Expectant mother Grace Ayandibu, elegant in a silver-gray floor-length dress, thanked her husband (at left in photo below, with Ayandibu at the podium) and her parents, who had immigrated from Nigeria to fulfill the big dreams they had for their children. She will complete a transitional year residency at St. Elizabeth Youngstown Hospital and then a Dermatology residency at Eastern Virginia Medical School in Norfolk, Virginia. There was humor: Brianna French, wearing flashing blue sunglasses, thanked LeBron “for making it cool to live in Akron” and announced she’ll be with Summa Health/NEOMED. Nicholas Yurko (shown in photo below) brought along a crew wearing Hawaiian garb to signal his match in diagnostic radiology at Tripler Army Medical Center in Hawaii. And there were shout-outs to many members of the faculty and staff. Yasmine Moftakhar, who matched in emergency medicine at Case Western/University Hospitals Cleveland Medical Center, called Rami Ahmed, D.O., Associate Professor of Emergency Medicine, ‘’the greatest mentor I could ask for.’’

Many students thanked Anita Pokorny, director of the Career Center in Student Affairs, for helping them through the hurdles.

And with the fourth year coming quickly to a close, some were definitely feeling sentimental.  Dan Kogan, who matched in preliminary medicine at Summa Health/NEOMED and in neurology at Jackson Memorial Hospital in Miami, summed it up: “I absolutely love this place.’’