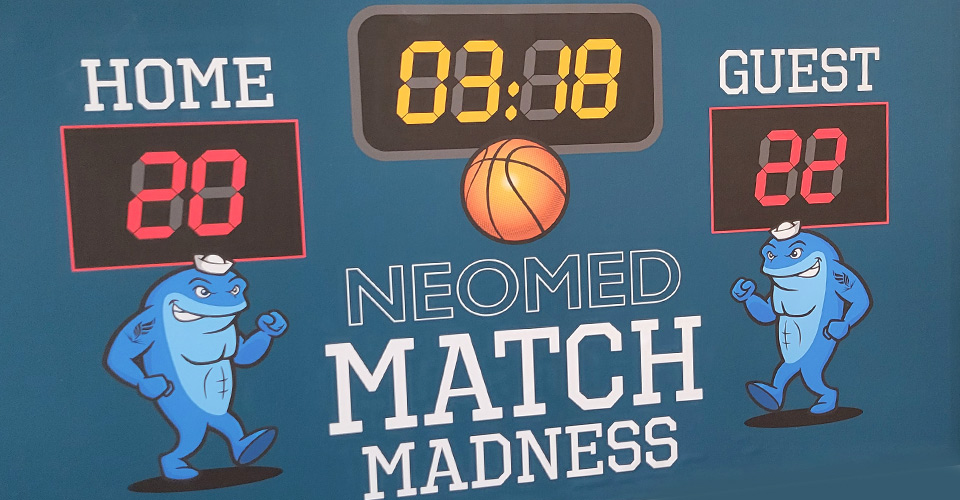 Friday, March 18, College of Medicine students, their families and friends could hardly contain themselves as they celebrated the news of where they will do their residencies. A total of 137 students matched in the national process. The day was even more exciting because the ongoing decline in COVID-19 cases made it possible to hold the event in person on campus as well as to extend it virtually to those who wanted to celebrate from a distance. The students selected a “Match Day Madness” theme, drawing on décor from the college basketball tournament to reflect the competitive spirit of the event.

Whether they are for or from Ohio, or both, the majority of NEOMED students typically choose to serve in this state, and that was true for matches this year. Fifty-seven percent of students matched with residencies in Ohio, including some of the nation’s best, which happen to be in Northeast Ohio: Case Western/University Hospital in Cleveland; Cleveland Clinic; MetroHealth Medical Center in Cleveland; St. Elizabeth Hospital in Youngstown; and Summa Health in Akron. Bill Downing, named as both the class Gonfalonian (the student ranked first in class) and the Class Speaker, proudly posed with his family, noting that he and his wife are also celebrating the high school graduation of their twin daughters this year.

The area of primary care was the most common match, with 45% of students – 62 total – being placed. Among those students, 27 matched in internal medicine while 18 matched in family medicine. Ten students matched in the pediatric field.

Students this year had the opportunity to open their individual envelopes with the news of their residency in private, at the beginning of the ceremony. Then, those who chose to share their news were called, one at a time, to a podium in the Ballroom to announce it to the friends, family and NEOMED community members gathered there.

Several students thanked family members who had come to this country with virtually nothing and now could proudly claim the first physician in their family. Some students brought family members to the podium with them, thanking them for their support. Laura Allen, visibly pregnant, joked that her friends and family (including her husband) had worried that she wouldn’t make it to the ceremony—but there she was!

In keeping with NEOMED tradition, a charitable collection was taken during the event, with half the proceeds going to a charity chosen by the graduating class and the other half to the student whose name is drawn last. This year, student Andrew Yazji chose to send his winnings along with the other half to a campaign called Ukrainian Refugee Assistance. The charity received a generous donation of $2,286 from NEOMED.

Following the ceremony, everyone was invited to a reception in the Gershen Atrium.

The final big date on the fourth-year students’ agenda is Commencement, May 7. Watch The Pulse for updates.