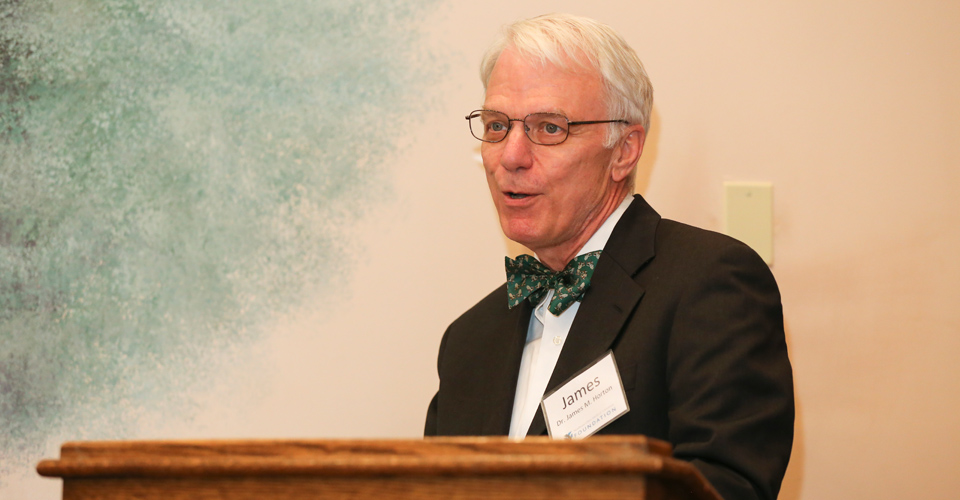 James Horton, M.D., a member of the Faculty Division of Infectious Diseases at Carolinas Medical Center and a clinical professor of medicine at the University of North Carolina at Chapel Hill, was the guest speaker for NEOMED’s annual Chatrchai Watanakunakorn, M.D., Lectureship in Medicine, held Thursday, Sept. 12, in Watanakunakorn Auditorium.

Second-year College of Medicine students Andres Diaz and Matthew McIntyre responded to Dr. Horton’s lecture with the following commentary for The Pulse:

It is fitting that NEOMED’s logo is a flame, because our school greatly values passing on the torch of passion for medicine to the community and each new generation of students. This is the time of year that first years are receiving their white coats, and second years were privileged to be invited to this year’s infectious disease lecture in honor of Dr. Watanakunakorn. I wanted to attend last year’s lecture but was unable due to schedule conflicts. This year’s lecture was about the impact of World War II on the world of medicine and the progress that was made in that time period. It is very exciting for me to receive this enculturation as a medical student in the U.S. Army who wants to specialize in infectious diseases.

Our class has quite a few students in the Armed Forces Health Professions Scholarship Programs, representing the Army, the Navy, and the Air Force, as well as veterans of the Armed Forces. It is good for all of us to learn about the way the military and war tactics affect civilian medicine. At military medical schools like the Uniformed Services University of the Health Sciences, these topics are discussed in greater depth, but these discussions are rarer in civilian medical schools. For example, we learned that efforts to produce penicillin on a large scale rivaled the efforts to make an atomic bomb and that the Army’s Office of Malarial Control is what we now know as the CDC.

We were presented important ethical and strategic dilemmas that the military faced at the time, which today’s military medical officers should also be prepared to face. For example, in a time when antibiotics like penicillin are scarce, should we treat wounded airmen or airmen with gonorrhea? Churchill decided on treating airmen with gonorrhea. Was that the right choice?

Another dilemma we faced in World War II that we still face today is prophylaxis for venereal diseases. Bishop O’Hara, representing the Catholic Church, feared that prophylaxis might embolden promiscuity and worsen the problem, but the Surgeon General believed we should employ every resource. That is a modern fear: will prophylaxis like PrEP for HIV put patients at risk for acquiring more STDs because they believe they are protected?

Yet another important situation we discussed was the situation of the American and Filipino prisoners of war. Most officers were shipped away for interrogation, so the only military officers left behind were physician officers, who had to take care of prisoners dying of wounds, disease and mistreatment. We HPSP students here at NEOMED are already officers and on our way to become physicians! What dilemmas does the future hold for us? What can we learn from the past?

The urgency that comes with war can put medical progress on a fast track, but it can also prevent citizens of war-torn countries from receiving access to important treatments like polio vaccines. And new advancements bring about new issues. Now that we have been so good at treating trauma, what do we do about post-trauma osteomyelitis?

There is so much to consider from this talk. Lectures like this bring to life the important applications of medicine and they give students the opportunity to share in the passions — to catch the flame — of fellow professionals. I would like to thank NEOMED and the Watanakunakorn family for making this possible.

I really appreciated this chance to put the medical science we have been studying into a historical context, in addition to understanding the current limits of scientific understanding. The guest lecturer helped to give us a frame of reference for how developments happen over time. The influence of culture on medicine is fascinating and a very helpful perspective as we will be participating in those changes in our careers.

The Watanakunakorn lecture honors Chatrchai Watanakunakorn, M.D., a professor of internal medicine at NEOMED and director of infectious diseases at St. Elizabeth Health Center in Youngstown until his death in 2001.