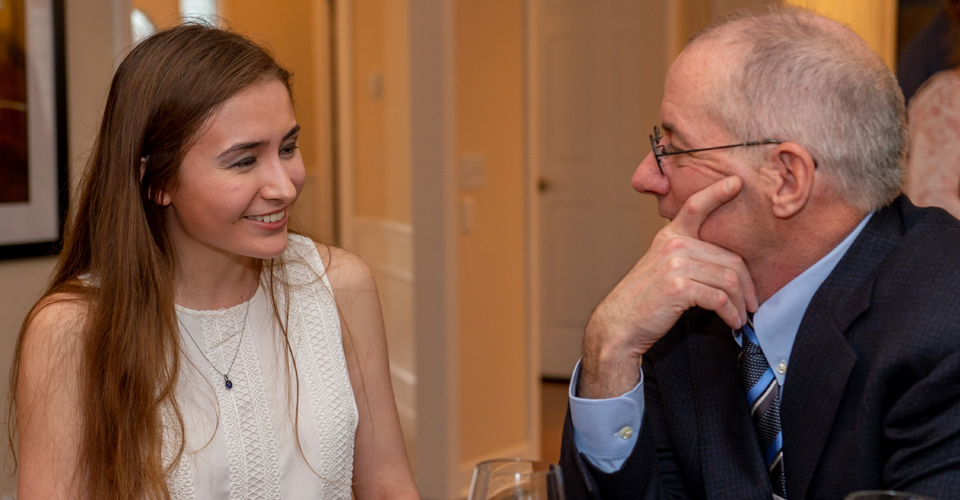 In a matter of weeks, Sarah Hill (pictured above with Ray Onders, M.D., ’88) will have graduated from the College of Medicine and begun preparing to move to Toledo for her surgery residency. Before all of that, the fourth-year student took time out from her NEOMED studies to spend time with some two dozen members of the NEOMED Alumni Association. The members had gathered for a casual evening of conversation, a light dinner and cocktails at President Gershen’s home.

The group paused midway through the evening for remarks from President Gershen; Mark E. Hostettler, M.D. (’84), president of the NEOMED Alumni Association Board of Directors; and Hill—who this year was the first recipient of the new Alumni Association Shine On Endowed Scholarship.

In June, Hill will begin a surgery residency at the University of Toledo.  To reach that goal, Hill researched and applied to 70 hospitals.  (Seven-zero. That’s not a typo.)  During her fourth year, she also completed three rotations around the country—working in Seattle, Salt Lake City and at the University of Virginia—to get the maximum exposure to institutions and programs she had learned were top-notch.

What no one tells you about your fourth year is how expensive it is, says Hill. As she explains, it’s now fairly standard to apply to an extensive number of programs. The first 10 cost $99 in total, but the price increases per application after that: 11-20 are $13 each, 21-30 are $17 each, and each additional application costs $26. “It's easy to spend more than $1,000 just making sure you have a well-rounded application pool, depending on the specialty of choice,’’ Hill says.

Interviewing out of town or moving to other cities to do rotations add other travel and living expenses, Hill told the alumni group. She thanked the alumni for taking away such financial barriers, allowing her to pursue her goals. Because of the scholarship, she didn’t have to turn down any opportunity, she told the group, with evident gratitude.

Dr. Hostettler said afterward that he led the group to start the endowed scholarship because he thought the Alumni Association should make a significant contribution to NEOMED’s students. The Alumni Association has raised $70,000 already. Meeting its goal of $150,000 would make it possible to assist one student each from the College of Graduate Studies, College of Medicine and College of Pharmacy.

As Dr. Hostettler puts it, “I wanted us to leave a footprint.’’