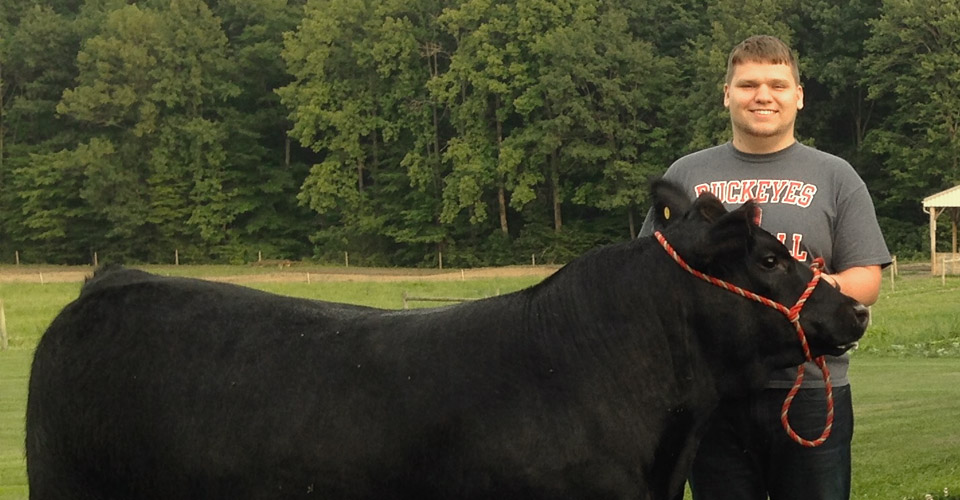 Moo-ving through the Rural Pathway

How much do raising cattle and practicing medicine have in common? According to Zack Zuga, a first-year medicine student at NEOMED, a lot more than you might think.

“It’s kind of funny. You can relate a lot of what happens in medicine back to cattle,” says Zuga, who grew up on a cattle farm in the small town of Farmdale, Ohio. (Really. We couldn’t make that up.)

“When you draw blood from cattle, you go up through their tail and vertebrae. It’s interesting learning about spinal taps in school now, because they say you hear two pops of the membrane when you go through—which is the same as when you go through a tail.”

Zuga is part of NEOMED’s Rural Medical Education (RMED) Pathway program, which aims to improve the health and quality of living for rural and underserved areas. Not only does it provide classroom training; it also gives students the chance to train in rural communities where they can gain the practical skills they need to work in those areas. Zuga is one of eight NEOMED students participating in the pilot program, which will officially launch during the 2017-2018 academic year.

RMED Pathway students take the same course load as their classmates in the College of Medicine, but with an emphasis on rural medicine throughout all four years of medical school. Specialized training includes early exposure to ambulatory and clinical training in rural communities; seminars on rural health topics; rural-focused clerkships and electives; and faculty and peer support. The RMED Pathway is an inclusive program, available to all students accepted to NEOMED, regardless of whether they are from a rural location.

Zuga says growing up on a farm prepared him for the busy schedule of a medicine student, since he was always occupied with chores like feeding the animals, harvesting hay and helping with the upkeep of the farm. When Zuga wasn’t doing those things, he was participating in his local 4-H chapter.

With all his work with animals, Zuga briefly considered becoming a veterinarian, but mentoring by NEOMED graduate Jeffrey Bedlion, M.D., (’95) convinced him to pursue primary care — specifically, general internal medicine. Dr. Bedlion was a family physician in Zuga’s hometown. From spending time with Dr. Bedlion at his internal medicine practice, Zuga realized this was the path for him — and that the NEOMED RMED Pathway was, too.

“I do want to go back and practice in my hometown. I’d love to work at Dr. Bedlion’s practice someday,’’ says Zuga. He also aspires to take over his family’s cattle farm. “Right now is my favorite time because you start taking the crops off and you can start hunting and seeing new animals come in from the woods,” he says. “You just don’t get that in the city.”