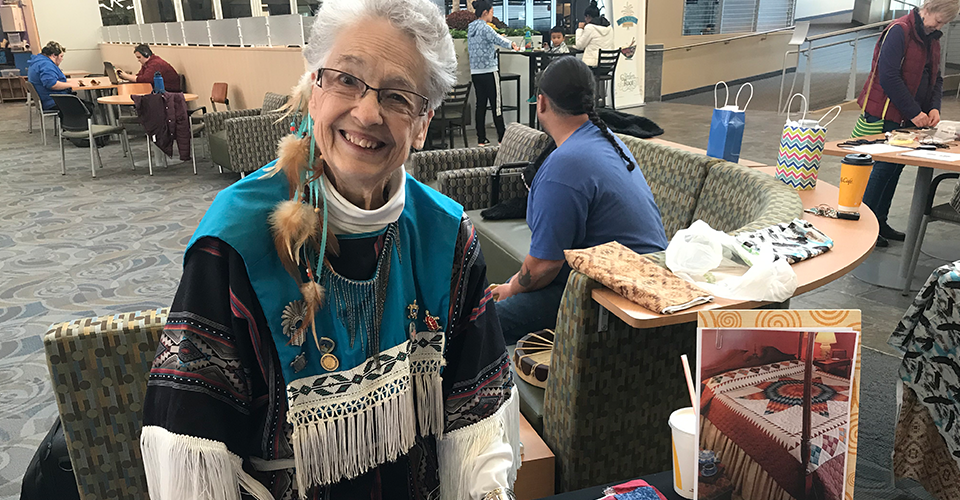 The series of events brings attention to and focuses on competencies around various diverse topics and cultural issues.

November is designated as National Native American Heritage Month -- a time when the cultural richness, diversity, and history of Native Americans is celebrated.

The NEOMED community observed Native American heritage on Friday, Nov. 1, by inviting a local Cherokee tribe to share some of their traditions in the NEW Center’s Jay A. Gershen Atrium.

The celebration was filled with drumming, singing and dancing.

For Native Americans, dancing constitutes an expression of victory, thankfulness and spirituality. One of the dances performed by the Cherokee tribe and NEOMED students was the “Stomp Dance,” in which people hold hands and dance in a circle following the drumming rhythms.

NEOMED students and community members also had the opportunity to learn about the history of the Eastern Band of the Cherokee Nation.

In the 1800’s, the government created a list of Native Americans and forced the Eastern Band Cherokee tribe to register their location and lands. The government used this information to confiscate the land of the Native Americans. The Eastern Band of the Cherokee Nation marched from North Carolina to Oklahoma during the death winter known as the “Trail of Tears” to relocate.

Other activities included the showcase of handmade artifacts, pottery, books about ancestry and spirit animals, and making prayer ties.

One of the tribe members, Kim Kennedy, College of Pharmacy assistant director of operations, wore full Native American regalia and brought a fan made of bone and feathers, which is used to remove all the negative energy.

These feathers were worn by Native American chiefs and represent honor and the connection to the Creator.

The regalia is worn in special events, festivities or dance exhibitions as the Pow Wow. Hawk feathers are also placed on the head and this is a symbol of flight and freedom.

Kennedy talked about the need to constantly remove bad vibes through the use of the fan and prayer ties in order to welcome all the positivity and good moods.

The exposition included Nell Orndorf, an artisan (shown in photo) who spoke about making the Star Quilt, a symbol of honor and generosity that was handmade by Native American women.

The NEOMED community also learned about sage and sacred tobacco. Sage is an herb considered sacred to the Native American Indians and is burned in ceremonies to drive out bad spirits and to make prayer ties (sacred bundles) to release negative energy.

After big activities, sage is used to clean the place, as a purification herb. Sacred tobacco is used for medicinal and spiritual purposes. For the prayer ties, different contents – such as sacred tobacco, cedar, juniper, rocks, and sea salt – can also be used.

This event was possible because of the commitment of NEOMED’s Office of Diversity, Equity and Inclusion, as well as the hard work contributed by Kennedy in organizing this cultural activity.