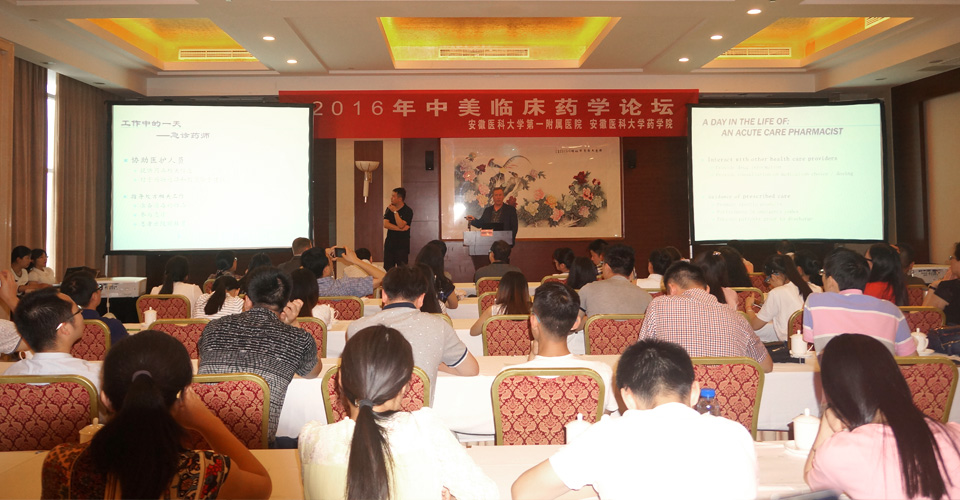 When seven Chinese students from Anhui Medical University start classes in the College of Pharmacy this month, two faculty members will have a special understanding of their perspective. That’s because Richard Kasmer, Pharm.D., J.D., professor of pharmacy practice and vice dean of pharmacy, and Seth Brownlee, Pharm.D., BCCCP, associate professor of pharmacy practice and associate dean of assessment at the College of Pharmacy, visited Anhui (pronounced On-Qway) Medical University in Hefei, China this summer. They spent a week teaching classes at the institution, which is now in its second year of collaborations with NEOMED. During the 2015-16 academic year, a group of Chinese pharmacy students lived in Northeast Ohio to observe NEOMED. This year, seven Chinese students will be enrolled as non-credit-earning students who will receive a certificate of attendance at the end of the academic year. An eighth, Xiaoli Zhang, was so inspired by her experience at NEOMED last year that she has enrolled at Kent State University this year, with the goal of entering the College of Pharmacy as a P1 in fall 2017.

July marked the first visit to China for NEOMED pharmacists Kasmer and Brownlee, who describe the Anhui Medical University campus as having an atmosphere similar to Cleveland State University. The University is located in an older part of the city of Hefei (pronounced Huff-A), which has a population of more than three million people. Hefei is in Anhui Province, a region of Southeast China that has a population of about 59 million.

“The Chinese students we interacted with were eager to learn about aspects of the role of a pharmacist in the U.S. that they don’t get exposed to at home in China,’’ said Dr. Kasmer after his return to Rootstown.

The professors discovered that in Hefei, “The physician writes a prescription and the pharmacist just fills it, more like a clerk selling cosmetics in one of our pharmacies,’’ said Dr. Brownlee. Most pharmacists in China are employed in hospitals, not in retail operations like CVS or Ritzman’s.

More than anything, the students were struck by the American model of a pharmacist as someone who talks with patients and who functions as the final safety check, asking if patients have questions about the medication and advising them about proper use, said Dr. Kasmer. The American approach of monitoring prescriptions to determine overuse of opioids or drug abuse was also new to the Anhui students.

Likewise, team-based care, where any member of the team – physician, pharmacist, nurse, or other healthcare provider—can question another member, has not yet become standard practice, said Dr. Brownlee.

“It’s still very hierarchical in China,’’ said Dr. Brownlee, noting that physicians are at the top of the pyramid, and questioning them in any way is frowned upon.

Over the course of six days, the two pharmacists taught classes on diabetes, cardiovascular problems, liver failure, careers in health care, and more. The topic of liver failure, in particular, was chosen because of the many deaths in China from cirrhosis of the liver. The disease can develop from alcoholism or environmental toxins—both of which are particular risk factors in China. While in China, Dr. Kasmer and Dr. Brownlee also presented a program on best practices and academic credentialing in U.S. pharmacy that was attended by a group of more than 100 health care professionals from across the province.

With their new insights about the pharmacy profession in China, Dr. Kasmer and Dr. Brownlee are excited to engage with NEOMED’s visiting Chinese students this year.