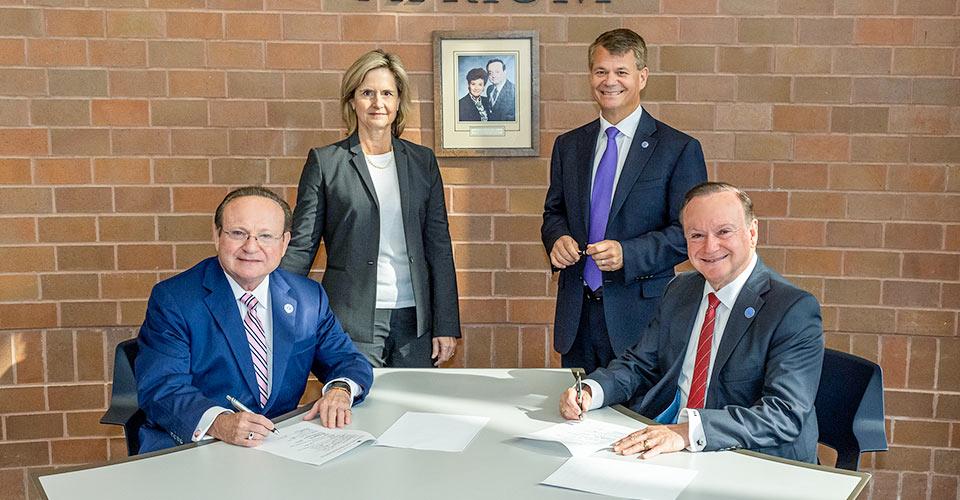 The Pulse shared on Tuesday, Sept. 29 that the NEOMED Board of Trustees approved the pursuit of a dental college.

It did not take long for the University to receive the type of community response and support needed to make the new college a reality. The endorsement came in the form of a $10 million commitment from Drs. Gary and David Bitonte

Bitonte is a familiar name to the NEOMED community – the brothers are the sons of Dr. Dominic A. and Helen M. Bitonte (both deceased), whose photo hangs in the Bitonte Atrium across from the Great Hall.

The Bitonte brothers serve as directors of the Dr. Dominic A. and Helen M. Bitonte Family Foundation.

The $10 million commitment is the largest individual amount that the NEOMED Foundation has ever received. The dollars will support the areas of greatest need restricted to the establishment, ongoing staffing, support and endowment of the College. In honor of the Bitonte Family Foundation’s commitment, the College will be named, the Bitonte College of Dentistry.

“As physicians and the sons of a dentist, Gary and David Bitonte have a first-hand appreciation of the critical access to care and concerns Northeast Ohioans have held for some time,” noted President John T. Langell. “The Bitontes have a history of giving back and their commitment to this much-needed dental college is a reflection of their family’s lifelong calling, contributions and caring for residents of Northeast Ohio and beyond.”

Starting with their parents, the Bitontes have been longtime supporters of NEOMED. The Bitonte brothers were quick to show their support upon hearing the news of the NEOMED Board of Trustees approval, however, their consideration had been long in the making since they first heard that NEOMED was looking into the feasibility of a dental college — more than a year ago.

“Gary and I talked about it and we said, ‘wow, this is a fabulous thing for NEOMED. It's a fabulous opportunity for the community and for Northeast Ohio,’” said David Bitonte, D.O., M.B.A., M.P.H. “And to add a third dental school to the state of Ohio, which is in need of dentists, we thought that was a wonderful way to honor our parents. We didn't quite know how we would do it or what we would do [if NEOMED moved forward]. But we held a number of meetings with NEOMED to arrive at the opportunity that's presented today.”

“It's been known for a long time that there is a correlation between oral health and general health and there are several examples of that. For instance, if there are detrimental bacteria in the oral cavity, the bacteria can migrate through the bloodstream and attach to the valves of the heart, which subsequently gives severe cardiac problems,” said Gary Bitonte, M.D.

“So that's one instance. And another one… If a person has difficulty chewing their food, then digestive and nutritional problems will ensue and that will lead to general overall deterioration in their health. Those are just two examples. There are many times when the two specialties come together,” he added.

In addition to the many physicians throughout the Bitonte family, there are several dentists. The family matriarch, Helen, was also heavily involved in the family dental practice. She strongly supported the practice and was part of the dental auxiliary — a group composed of the dental spouses who would go into schools and other settings to talk about proper oral care.

“Our father was at the forefront of so many things, but my mother certainly was one of those people supporting him and all the dentists in the area with her outreach that would promote proper dental care. Our parents also felt strongly about philanthropy. They believed that they had a wonderful life together and they were rewarded richly in many ways. One of the ways to give back to the community and support it and young people going to school was to provide monies that would encourage their education and finance their education,” said Dr. David Bitonte.

At 40% of the projected cost of $25 million to successfully launch and sustain the dental college, the Bitonte’s $10 million commitment is significant. And the fact that it is the largest amount NEOMED has ever received from a single donor isn’t lost on NEOMED’s vice president for advancement and president of the NEOMED Foundation, Doreen Knapp Riley.

Ms. Riley notes, “We are very grateful to the Bitonte family and their unwavering support for NEOMED. We hope others in the community, who have the capacity to help us bring positive change to these unmet dental needs, join the Bitontes in making philanthropic investments to launch this dental college more quickly.”