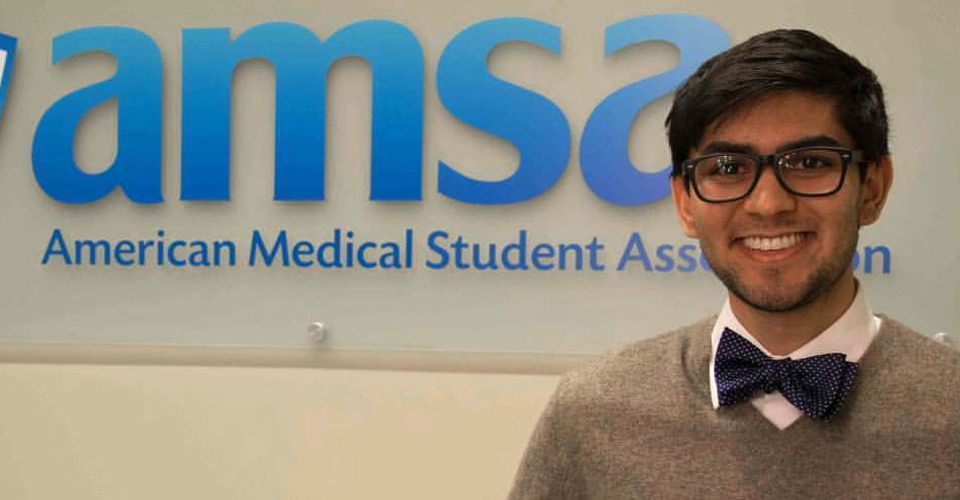 Cincinnati native and second-year medicine student Neil Vallabh has taken his interest in medicine to a new level with his recent national appointment as vice president for internal affairs at the American Medical Student Association (AMSA). This role is one of many that Vallabh has taken during the past four years at the organization, which is the oldest and largest independent association for physicians-in-training in the U.S.

Vallabh saw AMSA as an opportunity to pursue his interest in the public sector of health care, even before he became a medicine student. Through the association, he has advocated for access to health care for all people, particularly the medically underserved.

“In addition to patient care, I’m extremely passionate about public health and public policy,” says Vallabh. “It’s been here at AMSA that I’ve mastered crucial competencies that aren’t addressed in medical education curricula. The skills I’ve gained at AMSA coupled with NEOMED’s unparalleled didactics have been vital to my growth as a physician-in-training and an advocate for my patients and colleagues.”

All of his work within those roles, as well as his education at NEOMED, have helped prepare him for his newest role as vice president, through which he will serve another term on the board of trustees and be a member of its finance subcommittee. Vallabh will also serve as chair for the House of Delegates, where he will be the primary keeper of AMSA’s governing documents and plan national leadership elections.

Each task Vallabh completes as vice president of the association, paired with his NEOMED College of Medicine, will bring him one step closer to discovering what he intends to practice as a physician.

“While I haven’t yet decided which specialty or specialties I will pursue as a clinician, I do know that I will aim to strengthen the linkages between public health initiatives, health policy and community medicine to address national health priorities at a systemic level,’’ he says.

As Vallabh works to strengthen health policy, he encourages others to do the same. All medicine students, at any stage of training, are welcome to join the AMSA. For more information, contact Vallabh at vpia@amsa.org or visit www.amsa.org to learn more about the history, mission and upcoming events of the association.