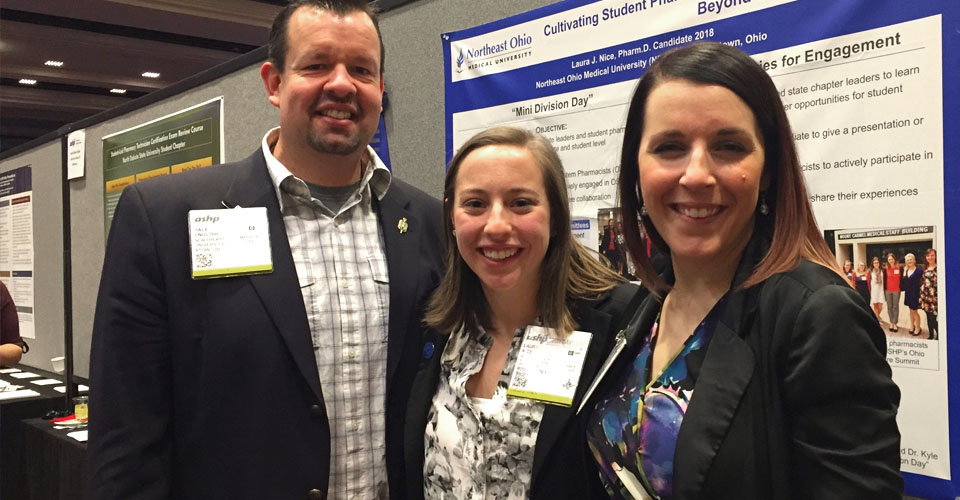 Laura Nice has joined the growing list of NEOMED students to win the American Society of Health-System Pharmacists Student Leadership Award. Granted this year to 11 full-time pharmacy students in good academic standing, the award recognizes students with an interest in pharmacy practice who have demonstrated leadership ability.

Nice, a third-year student in the College of Pharmacy, decided to apply for the award after seeing the success of previous members of NEOMED’s chapter of the Student Society of Health-Systems Pharmacists (SSHP). She learned in May that she had won—the third year in a row for a NEOMED student to be so honored.

That wasn’t all. As president of SSHP, Nice was honored a second time when her organization won the Student Organization of the Year award at NEOMED’s recent Student Leadership Awards banquet.

“SSHP has greatly impacted my professional life,” says Nice. “Our student chapter is affiliated with ASHP and the Ohio Society of Health-System Pharmacists (OSHP), and many of the activities we participate in are through ASHP and OSHP.” Through her membership, Nice has participated in national and state conference travel and presentations, as well as student legislative days; and she has collaborated with student members across the country.

In addition to Nice’s work with SSHP, she has many other accomplishments that allowed her to shine as an applicant. Nice has interned with Cleveland Clinic Akron General and served as member of ASHP’s Pharmacy Student Forum Advancement of Pharmacy Practice Advisory Group, completing projects with other pharmacy students across the country.

While Nice’s involvement with a variety of professional organizations and activities helped her to capture one of the 11 leadership awards, her passion for pharmacy stretches far beyond trophies and certificates.  Upon graduation, she plans to complete a pharmacy residency program in internal medicine, ambulatory care and administration. She hopes to do so in Northeast Ohio, an area that she calls home.