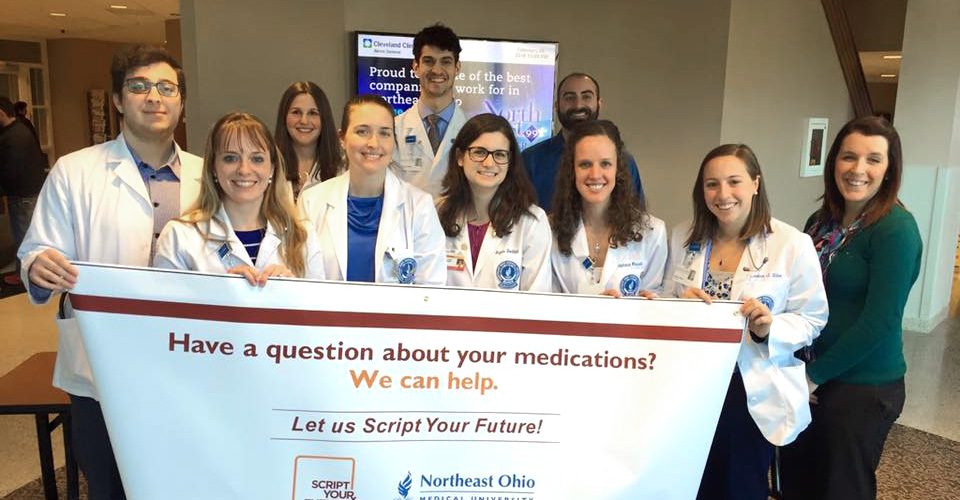 Offering two free clinics, taking a medical mission trip to Honduras and creating educational materials for three underserved senior complexes are just some of the outreach events Northeast Ohio Medical University (NEOMED) did to help win the Health Disparities/ Under- Represented Community Outreach Award while competing in the national Script Your Future campaign.

The Script Your Future campaign helps to address the widespread problem of poor medical adherence (not filling prescriptions, not taking medicine or not taking it as prescribed) by encouraging patients to start conversations with doctors, nurses, or pharmacists if an issue arises with a medication. This campaign includes a two-month long competition during which student and faculty teams compete to create solutions and outreach in their communities to raise awareness.

This year, the NEOMED team focused on addressing both the economic and cultural barriers that stand in the way of medical adherence.

“It was so exciting to win this award because it resonates with NEOMED’s mission,” said Jaclyn Boyle, Pharm.D., assistant professor for community pharmacy and innovation at NEOMED. “It felt good knowing that this award aligns exactly with what we stand for.”

Since the competition started in 2012, NEOMED has had an impressive track record, winning the Communication and Media Outreach Award in 2014 and 2015. In 2014, the NEOMED team successfully lobbied Ohio Governor John Kasich to issue a proclamation declaring February 14 as “Remember to Take your Medication Day” and in 2015, NEOMED was able to reach more than one million people via outreach opportunities.

“Truly, I believe what contributed to NEOMED winning this award is the help of every student, faculty member and preceptor contributing their time to this campaign,” said Kaitlin Patterson, third-year pharmacy student and chair-elect of the Script Your Future campaign. “This is a group award and every student should be proud of their accomplishments this year!”