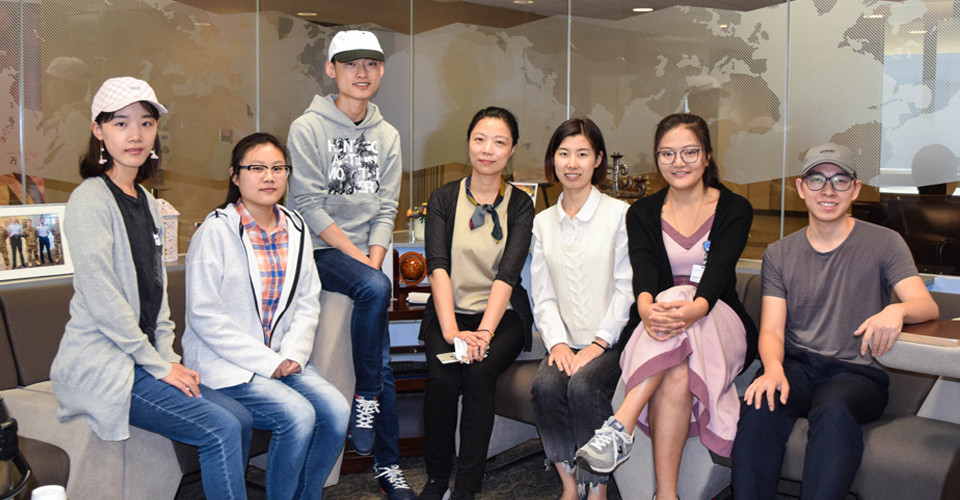 Although they haven’t been in the U.S. long, six students and a professor from Anhui Medical University in Hefei, China, are quickly getting settled in at NEOMED. As part of an educational exchange between Anhui (pronounced On-Qway) Medical University and NEOMED’s College of Pharmacy, the six are enrolled as non-credit earning students and will receive a certificate of attendance after following first-year and second-year College of Pharmacy students, each for one semester.

Xuefeng Xie, an epidemiology professor at Anhui Medical University, is also spending an academic year at NEOMED enrolled in the University’s Fellowship in Academic Medicine (FAME) program, a professional development program designed for health professions educations and administrative leaders. Along with the students, she’s ready and eager to take in all that’s new.

In a recent meeting in the Inclusivity Center, where the group gathers for Tea on Tuesdays, they unanimously agreed that they’re excited about seeing the lifestyles of American students. To get started, most of the students have adopted American names. Agnes, Destiny, Leo, Lori, Betty and King (shown from left to right in the photo, with professor Xuefeng Xie in the center) said they have already noticed some big differences in learning environments—beyond the fact that American students type into laptops and use the online Academic Integrated Management System (AIMS), while students back home take notes by pen and paper.

What’s even more striking to them? At Anhui University, students wait until after class to ask any questions—but  here at NEOMED, it’s acceptable for students to raise their hand during class any time they have a question, said Destiny. She also commented on the friendliness she has found here in Ohio. Leo said he has enjoyed the opportunity to make friends with people of different races, and he appreciates the way students work and study together because of NEOMED’s focus on team-based learning.

Contrasts in the classroom aren’t the only differences the students have observed. Everyone laughed in agreement when Destiny observed that in China, the students aren’t required to be as independent as residents of The Village. Here, in apartments adjacent to campus, they are learning to fend for themselves, cooking and cleaning—with no help from their moms.