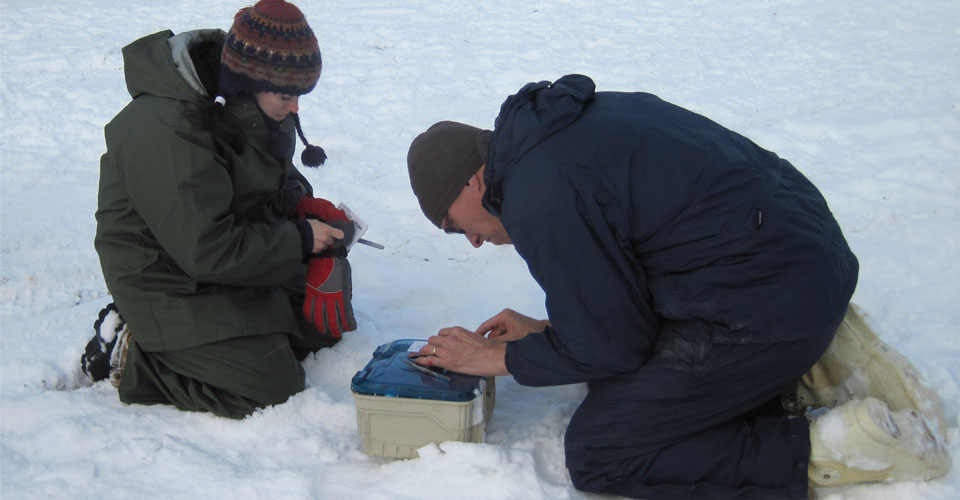 Whales and dolphins have brains that are larger than those of most mammals, but it is not clear why. It could be because some whales and dolphins have very complex social systems, because they have sophisticated hearing, or because they are highly intelligent. That intriguing question has been occupying the members of the research group of Hans Thewissen, Ph.D., Ingalls-Brown Professor of Anatomy.

Dr. Thewissen’s fossil collecting teams have discovered fossils of the earliest whale ancestors in Pakistan and India. The skeleton of these, the walking whale Ambulocetus natans, is displayed on the NEOMED campus in the F (Watanakunakorn) Building,, and also inspired the choice for NEOMED’s mascot, Nate. With the support of a new quarter-million dollar grant from the Hennecke Family Foundation, Dr. Thewissen’s team will be studying the brains of fossil and modern whales and their relatives, using CT scans of the skulls of the Eocene whale ancestors that he discovered in India and Pakistan. That has never been done before.

CT-scanning these specimens is difficult. The skulls are large, requiring a super-sized scanner, and because the skulls are fossilized, the scanners also need to be extra powerful. This research will tell us when different parts of the brain increased in size, and that can be related to changes in other organ systems, says Dr. Thewissen. For instance, if study of the ear of a fossil whale indicates that it echolocated, and if that whale also had a large brain, it is possible that the two are related.

The Thewissen lab also studies modern whales in Alaska. (In the photo, Dr. Thewissen is shown taking whale samples in the snow in Utqiagvik—formerly Barrow—Alaska, with his student Meghan Moran, who has since graduated.) The size of the brains of sperm whales and killer whales is larger than those of any other organism, including humans. However, when scaled for body size, dolphins have brains larger than all other mammals, except for humans. Indeed, whale brains are much larger than the brains of apes.

However, brain size is not the best way to assess brain function. A better measure is to determine how many neurons (nerve cells) there are in the brain. Humans and other primates pack about twice the number of neurons in a cubed inch of brain as most other mammals. Unfortunately, nobody has ever counted the number of neurons in the brain of a dolphin or a whale, and that is exactly what Dr. Thewissen plans to do.

“It is going to be a big job,” he says. “A colleague of mine counted an elephant brain and it took a whole bunch of undergraduates more than a year to do it — and, elephant brains are smaller than these whale brains.”

But he’s up for the challenge and hopes to engage students from the Biomed Science Academy in the process. “Brains are pretty cool, and so are whales and dolphins,” says Dr. Thewissen. “This project is bound to interest lots of people and really move our understanding of brain evolution ahead.”