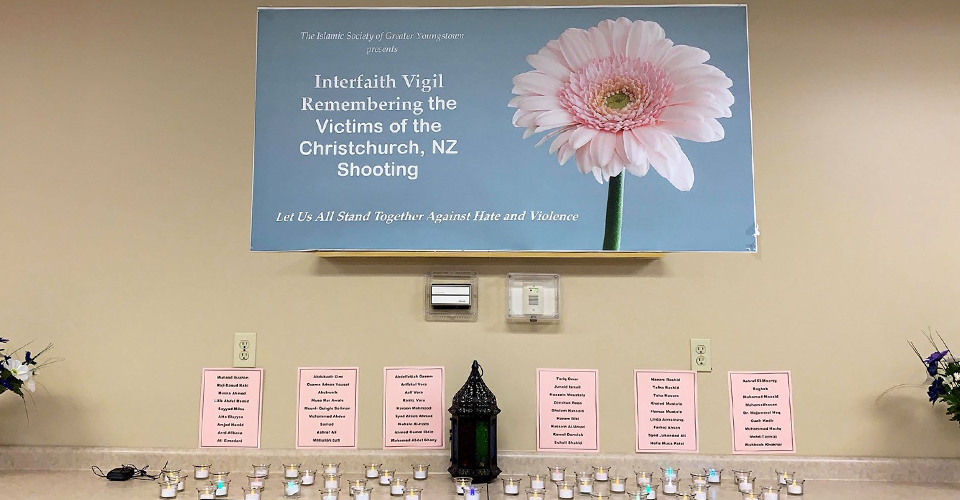 On March 15, 2019, mass shootings at two mosques in the city of Christchurch, New Zealand killed 50 people and injured many more. Students from NEOMED attended an interfaith vigil in Youngstown after the event and wrote the following reflections:

I have been a member of the Muslim community of Youngstown ever since I was very young. As a current officer for the Muslim Student Association, I felt that it was very important to attend the interfaith vigil that my mosque had organized in remembrance of the lives lost in New Zealand, so that I could represent us as NEOMED Muslim students. I was also lucky enough to have very good friends of different religious beliefs who are also NEOMED students attend the event with me.

It was extremely humbling to witness firsthand the tremendous amount of support there is in my community of Youngstown, with various religious leaders and members of the community all coming together in our time of grieving. The ceremony and the words spoken by so many different, diverse people moved and inspired me. I felt overall very blessed to be present at an event that displayed how we as humans can lift each other up in times of tragedy, regardless of religion, race, or background.

It was humbling to be present at the vigil because people representing a diversity of faiths wanted to express messages of hope and change. The most impactful takeaway was that there are extremists within every religion; no one is all bad or all good. If everyone could express simple acts of kindness toward themselves and their brothers and sisters, we as a society would move toward productive change.

It was incredibly moving to see such diverse representation in a house of worship during the interfaith vigil in respect to the victims of the New Zealand shooting. Most memorable aspects of the vigil included the seemingly endless population of religious leaders of various faiths wanting to share their love and concern and express the value of standing together as one in not only times of crisis such as this, but also in everyday life. Even as time was ending for the vigil, community members continued to stand up in hopes of being able to say a few words in honor of the victims.

The experience was enriched by the variety of faiths and people that converged together at the mosque,  so much so that chairs were continuously added to accommodate everyone attending. Overall, it was a gentle and beautiful reminder that even with different systems of belief, as people we all stand together.

Although this was a sad time, it was great to see people from all faiths and backgrounds represented. Despite our differences, everyone came together for one purpose – to advocate for people to live in peace and to allow people to practice their beliefs freely without fear.