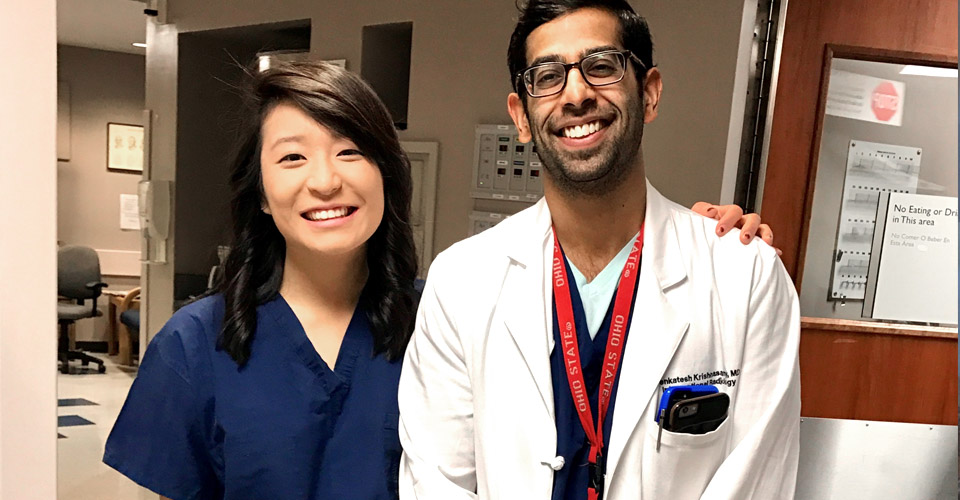 Julie (Yajie) An completed her third year at NEOMED’s College of Medicine in 2015-16. She was selected to spend the 2016-17 year in the prestigious Medical Research Scholars Program at the National Institutes of Health in Bethesda, Maryland to pursue her interest in medical research. Julie is one of approximately 50 students nationally who were chosen for the program.

Julie wrote about her first impressions when she started at the NIH in August. Here’s her latest update about her work studying minimally invasive therapy for patients with hereditary renal cell carcinoma (kidney cancer). The NIH has one of the largest cohorts of patients with this disease.

“What if we… Would it be possible to…”

When I reflect on my time during third-year clinical rotations, I can recall many instances where I wondered if there were better ways to solve specific challenges. As a newly minted participant on the medical team, though, my role at the time was to absorb all that I was exposed to—and not so much to think about what else could be done. However, this all changed on my medicine rotation when I was offered a chance to observe an emergency liver procedure called TIPS (Transjugular Intrahepatic Portosystemic Shunt) with Interventional Radiology (IR).

Stepping into the IR suite, I was greeted by a friendly group of radiology staff members and handed a protective “lead” gown. I watched a life-saving procedure done entirely through a blood vessel in the neck, guided by a live view of internal structures. This was where I was first exposed to the innovative, technology-driven, problem-solving specialty of IR. Subsequently, this became the driving force behind my choice to work this year in the lab of my research co-mentor, Bradford Wood, M.D., the director of the NIH Center for Interventional Oncology and chief of the NIH Clinical Center’s Interventional Radiology section.

“Oh! I didn’t realize that was possible.”

That’s something I often say to myself at the NIH. My lab focuses on taking existing IR techniques, combining them with novel technologies and applying them to create minimally invasive (and better) therapies for cancer. Members of the research team, which includes my co-mentor Elliot Levy, M.D. (staff clinician in interventional radiology) have previously made tremendous contributions to developing current and upcoming medical technologies—everything from kidney and liver ablations to drug-eluting/radiopaque embolization beads to image-fusion technologies and anatomic navigation devices.

I am no longer just an observing bystander, but now an active participant. Although I’m still a trainee, our team of seasoned researchers (including interventional radiologists, physicists, chemists, biologists, engineers, technologists and nurses) has allowed me to jump in head first into the group’s current efforts. Last week, (with an incredible amount of help from staff scientist Sheng Xu, Ph.D. and collaborating urologic oncology clinical fellow Shawna Boyle, M.D.) I submitted two abstracts to the annual scientific meeting of the Society of Interventional Radiology. That’s a major milestone for a budding researcher like me.

Currently, I am working on a project that evaluates previous treatment via radiofrequency ablation for patients with kidney cancer. For patients with multifocal or bilateral tumors, instead of removing the entire kidney, interventional radiology staff can perform this minimally invasive technique by placing a needle and heating (ablating) the tumor. As part of this project, I am evaluating the imaging scans after therapy to determine if all the cancer was killed (ablated). I am also examining the effects this intervention has on long-term kidney function. For example, I’m using this metric to compare ablation with having part of the kidney removed (nephrectomy).

Aside from the cool toys and the pioneering medicine, my favorite part about the experience has been the people—in particular, Venkatesh (“Kavi”) Krishnasamy, M.D. (staff clinician in interventional radiology) who relatively recently completed a fellowship in IR. Dr. Krishnasamy and I have a lot in common: We are both first-generation Americans, enjoy eating buckeye chocolates, have a 330 area code for our cell phone numbers, and attended the BS/MD program at the University of Akron. I sometimes observe cases with him during the day. In the afternoons, when there are free moments, we get together to talk about our current projects or even just random things. He’s been a phenomenal co-mentor for me this year, and I’ve learned a great deal from him regarding medicine…and life outside of medicine.

So, yes. In the sea of talented people from all over the world here, I have the particular pleasure of working directly with a NEOMED alum. Interventional radiology, now its own primary specialty, is a young field with the potential for exponential developments. I was lucky enough to have gotten a glimpse of what IR does during my third-year rotations at NEOMED. And now I have the opportunity to see what IR can do in the future.