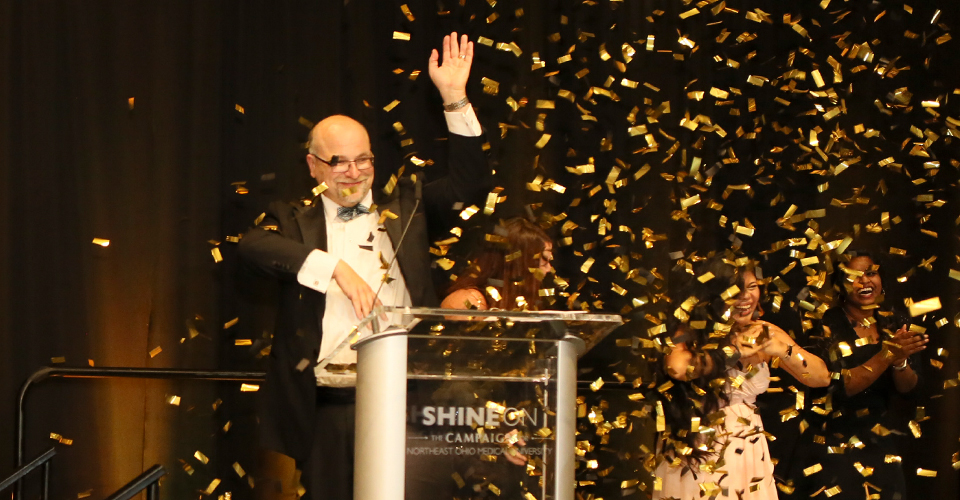 Saturday night at the NEW Center, an overjoyed crowd popped the cork on the Shine On campaign.

We did it—and then some!

One moment, 400 attendees of the One Shining Evening gala were dining in the Grand Ballroom and Daniel Blain was about to announce the final amount raised by the Shine On campaign. The next minute, I Gotta Feeling by the Black Eyed Peas interrupted Blain and a flash mob of students was dancing through the party, thanking guests and working their way to the front of the room to the accompaniment of virtual fireworks exploding onscreen.

When the final campaign total was projected, Blain – vice president for advancement and president of the NEOMED Foundation – seemed momentarily overcome by the news that it was a hefty 10 percent over the campaign goal. Members of the crowd cheered and spontaneously rose to their feet as Blain announced that $44,014,352 had been raised to advance students, advance community health, and advance innovation and research.

A full evening had been planned to celebrate the good results that so many had helped bring to pass.

To begin, guests attended either a gala reception in the atrium of the NEW Center or the Alumni Reunion and Awards Reception in Cook Alumni Hall. For dinner, guests gathered in the Grand Ballroom, seated at tables decorated with all-white bouquets of hydrangeas and roses.

More generosity flowed after dinner at an auction that raised $61,000. Of that, more than $37,000 was designated for student scholarships, while another $24,000 was raised for the Blue Fund in support of the White Coat ceremony. At the ceremonies for the College of Medicine and College of Pharmacy Monday, Sept. 17, many fortunate students will find a card in the pocket of their coats informing them that a donor has made a gift to them.

After dinner, guests danced to music of the TCB band, sampled the desserts, and mingled downstairs in the NEW Center atrium or in Cook Alumni Hall.

The presentation of the annual Lifetime Achievement Award to C. William Keck, M.D., M.P.H., emeritus professor in the Department of Family and Community Medicine, spoke to the tradition of collaboration that has been in place at NEOMED from the beginning.

Dr. Keck began at NEOMED in 1976 with a dual appointment to serve as director of health for the City of Akron and to teach community medicine. Charged with finding ways for a city health department and university to collaborate in ways to benefit public health, Dr. Keck developed support that led to a multi-institution public health degree. Today, NEOMED oversees the Consortium of Eastern Ohio Master of Public Health program, with degrees for students enrolled at NEOMED granted by Northeast Ohio Medical University.

In a heartfelt acceptance speech for the Lifetime Achievement Award in which he thanked many, including his wife, Ardith, Dr. Keck joked that regardless of the award’s title, he still plans to keep working as a volunteer in the field.

A proverb for every occasion

Patrick Kachur, M.D. (’90), told the audience at the evening’s Alumni Reunion and Awards Reception that Dr. Keck had been a very important mentor to him.

Dr. Kachur, honored with the Distinguished Alumni Award, spent time living in East Africa, where he conducted research in the area of malaria—research for which he is now globally recognized. He said the Swahili people have a quote for every occasion, and that one is, "If you see boats on the water."

The meaning lies in the unspoken ending, said Dr. Kachur, explaining, “That second half is a gentle rebuke. It’s a kind reminder to spare a thought when you see things going really well or as expected—spare a thought for all those unseen people whose talents, efforts and creativity have gone into making that possible. I think it’s a fundamental attitude of those of us who work in public health: that we all expect to work as part of a team.”

Dale English II, Pharm.D., R. Ph., FASHP, honored with the Distinguished Service Award, said that in today’s world – and in the apparently perfect lives shown on social media – that the attitude of "it’s all about me" is all too common. In his remarks, he encouraged attendees to instead, "count others more significant than yourself."