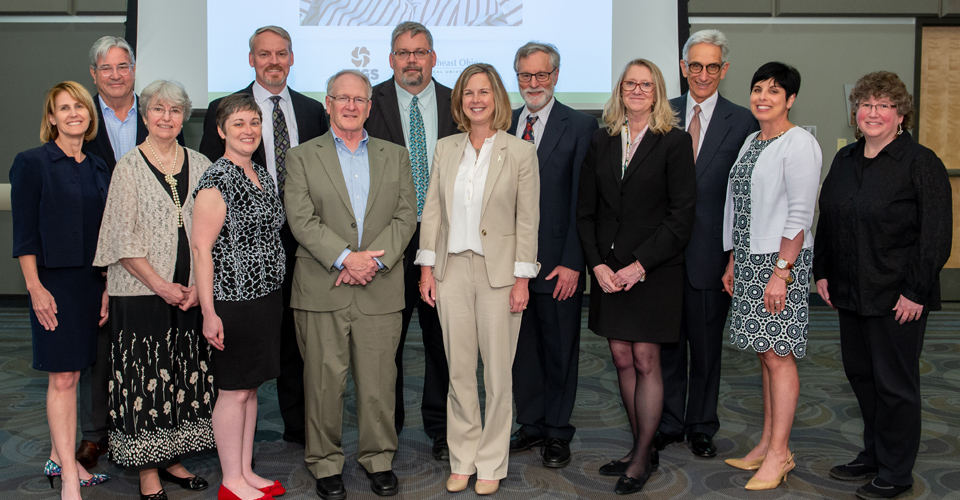 Peg's Foundation served ice cream sundaes after its grant announcement at NEOMED on Thursday, but it delivered the cherry on top first: a $7.5 million grant to the Department of Psychiatry.

This new, record $7.5 million grant from NEOMED’s longtime partner will help NEOMED do what the Hudson-based funder likes to do best: Think bigger. The grant to the Department of Psychiatry in the College of Medicine is the largest privately funded grant for mental health ever given in Ohio.

Since making its first grant to NEOMED, creating the Margaret Clark Morgan Endowed Chair in Psychiatry in 2005, Peg's Foundation has invested more than $20 million in NEOMED, said Rick Kellar, president of Peg's Foundation (shown second from left in the back row of the photo above). He told those assembled in NEOMED’s Grand Ballroom Thursday afternoon that the newest funding will continue to accelerate the work of three Centers of Excellence in the Department of Psychiatry:  the Best Practices in Schizophrenia Treatment (BeST) Center; the Ohio Program for Campus Safety and Mental Health (OPCSMH); and the Criminal Justice Coordinating Center of Excellence (CJCCoE). The Centers assist community partners in multiple systems throughout Ohio.

The goal of NEOMED and Peg's Foundation is to have the psychiatry department’s work serve as a national model, disseminating treatment services through community organizations to promote recovery and improve quality of life for people with schizophrenia and other severe mental illnesses.

In practice, that has meant that NEOMED’s three Centers partner with a wide array of community-based social services agencies statewide, providing them with training and education so that they can offer effective treatments and interventions to people in communities far from the NEOMED campus.

When Margaret (“Peg”) Morgan and her husband, Burton D. Morgan, were raising their son, who had schizophrenia, expertise in serious mental illness was in short supply, said Kellar. That’s why they started the Margaret Clark Morgan Foundation (now Peg's Foundation). While there is still much work to be done, today, there is less stigma, more access to care, and a movement to decriminalize mental illness.

Calling the grant an important investment that will help NEOMED to help partners across Ohio, an emotional Mark Munetz, M.D., the Margaret Clark Morgan Chair in Psychiatry, choked up more than once when thanking Peg’s Foundation and his wife, who was in attendance. He acknowledged BeST Center director Patti M. Fetzer, LISW-S; CJCCoE director Ruth Simera, M.Ed., LISW; and OPCSMH director Amy Lukes, MSSA, LISW-S; as well as Christian Ritter, Ph.D., who leads the Community-Based Mental Health research focus area at NEOMED.

The next phase of work will be to break down silos and accelerate the work that is already in progress, said Dr. Munetz.

He made two more announcements. One was the creation of the Drs. Fred and Penny Frese Annual Lecture Series at NEOMED. Fred Frese III, Ph.D., is a professor of psychiatry who has lived with schizophrenia and is well respected for his lectures to College of Medicine students on the topic, as well as for the national impact he made as a panelist on PBS’s “Minds on the Edge: Facing Mental Illness,” which aired in 2009.  Penny Frese, Ph.D., is with Red Flags National, a framework and tool kit for mental health education.  Dr. Penny Frese is also a Peg’s Foundation board member.

Details about the first speaker and the date of the first lecture will be forthcoming.

The second announcement was to introduce the University’s 25th Visiting Professor in Community Psychiatry, Anita Smith Everett, M.D., chief medical officer, Substance Abuse and Mental Health Services Administration (SAMHSA) and immediate past president of the American Psychiatric Association, who was present for the grant announcement.

In her remarks, Dr. Everett praised Dr. Munetz for his wide-ranging impact as a community psychiatrist who is particularly effective in linking systems to help people. Too many people with serious mental illness are incarcerated, noted Dr. Everett. A well-regarded technique that Dr. Munetz co-developed, the Sequential Intercept Method, can be used to change the systems under which mental health is criminalized.

As a leader at SAMHSA, a federal organization, Dr. Everett spoke from a national perspective to identify five areas in which NEOMED’s work dovetails with the government’s new mental health blueprint—a plan that she said is targeted to be implemented over the next four years.

Here’s one notable way in which the Centers’ goals mesh with new government goals, said Dr. Everett: The BeST Center will be scaling up its work in treatment of, and recovery from, serious mental illness.

It’s challenging, working in an environment where mental illness is criminalized, said Kellar, and the Foundation’s goal is ‘’to improve lives, not perpetuate a broken system.’’ He said the board and staff of Peg’s Foundation wants to fix the system—and more. Drawing the analogy of planting a tree, Kellar noted that down the road, that newly planted tree will provide shade but the people who are baking in the sun with no shade need help right now.

Final remarks by Elisabeth Young, M.D., vice president for health affairs and dean of the College of Medicine, captured the optimistic tone of the afternoon. “The grant will allow NEOMED and the College of Medicine to train all medical students and residents in the very best mental health practices and interventions, Dr. Young said, adding, “ALL of our graduates – regardless of chosen specialty—will treat people who have mental illness with competence, compassion, dignity and respect.”