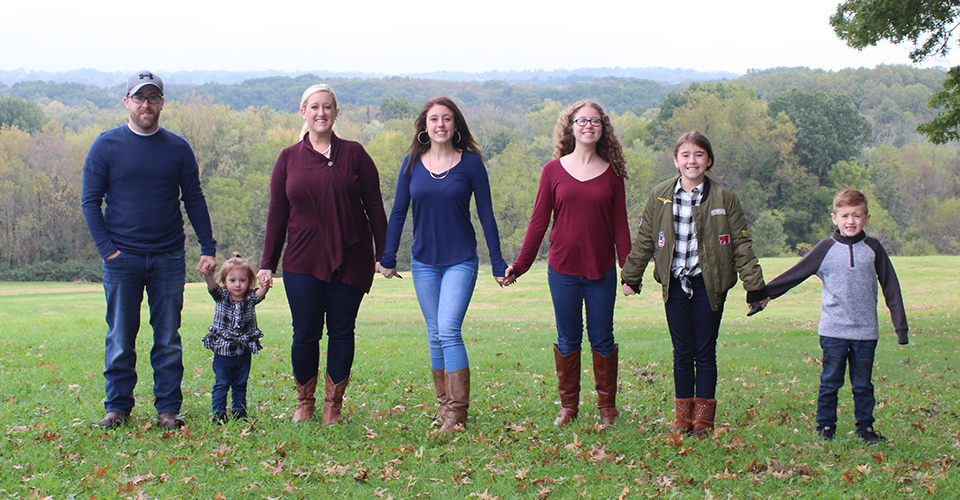 As a mother of five children, Ashley Brooks knows a thing or two about taking care of others. Now, as a second-year College of Pharmacy student, she’s taking that idea to a new level.

For six years, Brooks carefully balanced raising her growing family and holding a full-time job while attending Kent State University to complete a bachelor’s degree. “I fought hard to get here. Jim Barrett (interim associate executive director of enrollment services and director of admissions) and I joke because initially, I was waitlisted, so I called and emailed him non-stop,” she says. “I was not going to let them tell me no. I had my eye on NEOMED for 10 years.”

Within a matter of months, Brooks gave birth to her fifth child and received her official acceptance letter.

A career to honor her mother

Brooks’ mother was diagnosed with an extremely rare genetic disease in 2007. Six weeks after Brooks received her acceptance letter to NEOMED, her mother passed away.

“My mom is the real reason why I went into pharmacy,” says Brooks. “Health care providers need to understand the real struggle of what their patients go through. I saw that first-hand sitting there as an undergrad watching my mom. I took her to countless doctor’s appointments and held her hand as we fought her battle together. The most valued lesson that NEOMED instills in their students is empathy. It didn’t matter to my mom how top notch her health care providers were, if they shared empathy, they became her favorite.”

“She saw me fight and struggle for six years and it made me feel better to know that she at least knew I got accepted,” she says. “Our White Coat Ceremony was difficult. I just wanted her to be here. It reminded me that a lot of the things I do are for my family, and a lot of them are for my mom.”

Brooks attributes much of her success to her husband’s support.

“I would not be here and able to do well by having the time to study and pass my courses, if it weren’t for him. My husband is why I’m able to do what I do,” she says.

Between NEOMED’s Student Curriculum Council, guiding undergraduates as a College of Pharmacy Early Assurance Peer Advisor, interning at a behavioral health pharmacy and volunteering on a research project with faculty, Brooks can attest to the power of time management.

“You’re never going to feel like you’re giving your all to something, because giving 100 percent to two things at the same time is not possible,” Brooks says.

“Create a support system. If you have children and no support, chances are, you’re going to struggle. It will be extremely difficult. A support system could be a very good sitter, a spouse, parents, grandparents, anybody. You have to establish that first before you start pharmacy school,” she advises.

“Get your support system in place. That will give you the best start.”