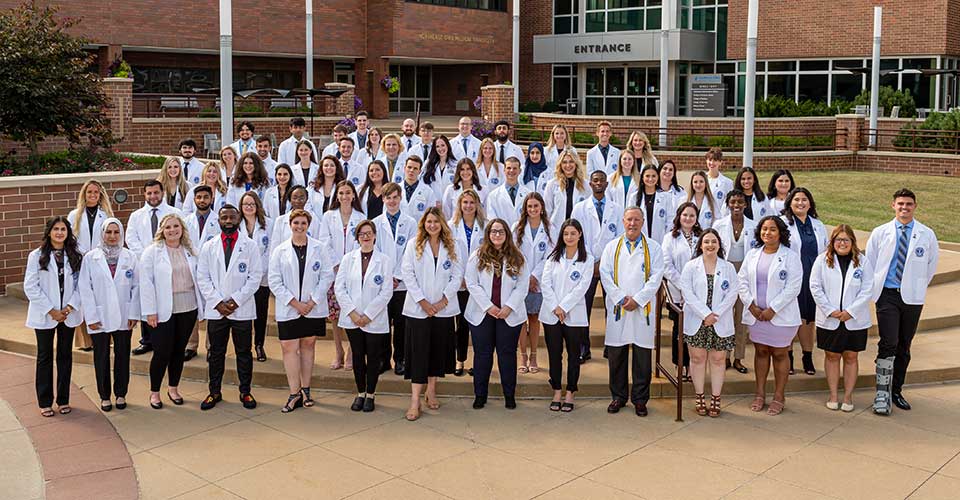 The newest batch of future transformational leaders in the field of pharmacy has officially begun their journey at NEOMED. After completing orientation, the week was capped off on Friday afternoon with the White Coat Ceremony. The 68 members of the COP Class of 2026 each received their white coats – signifying the transition and major responsibilities as a future pharmacist – to the cheers of their loved ones in the audience in the NEW Center Ballroom.

“The white coat is an international symbol of professionalism not just for the pharmacy profession, but for the health science disciplines broadly,” Julie Johnson, Pharm.D., said in her keynote speech. “It says to the public that you are a trusted member of the health professions; that you have sought a career of service to others; that you have invested significant efforts in obtaining an education that gives you the knowledge and skills to serve others in your specific discipline.  It is a symbol of trust, a symbol that indicates you understand that the health of others is in your hands and that you will always behave in a way that is in their best interest.”

She also noted that passion is needed to become a transformational leader.

“Find your passion and live it – and if you do this, there is little doubt that you will have an impact during your career, and there is a good chance you will be a transformational leader in the process,” said Dr. Johnson.

The first-year students were also greeted by their dean, Richard Kasmer, Pharm.D., J.D. He first took a moment to thank the guests in the audience, who play the important role as the support system for the students as they begin their journey at NEOMED that will end with them receiving their Pharm.D.

He then turned his attention to the students.

“Donning the white coat for the first time is a tangible symbol of the extraordinary journey you’ve embarked upon, and I suspect you will carry the image with you forever,” said Dr. Kasmer as the students prepared to have their coats placed on them by the four second-year students who were selected by their peers (Frank Benavides, Madelyn Braman, Olivia King and Sophia Santos).

Once each student received their crisp new white coat, they received words of wisdom from Jacalyn Rogers, Pharm.D. (’13), M.S., who was in their shoes not long ago.

“These four years are going to help you determine the pharmacist you will be for the rest of your career,” said Dr. Rogers. “It will be guided by the friendships you make, experiences you have and reflections on what you learned.  Remember that pharmacists are considered not only to be ‘essential’ health care workers but also transformational leaders, making a difference each day in our community.”

Following the event, the students were happily greeted by their loved ones outside of the NEW Center Ballroom, celebrating the major milestone and all that is to come.