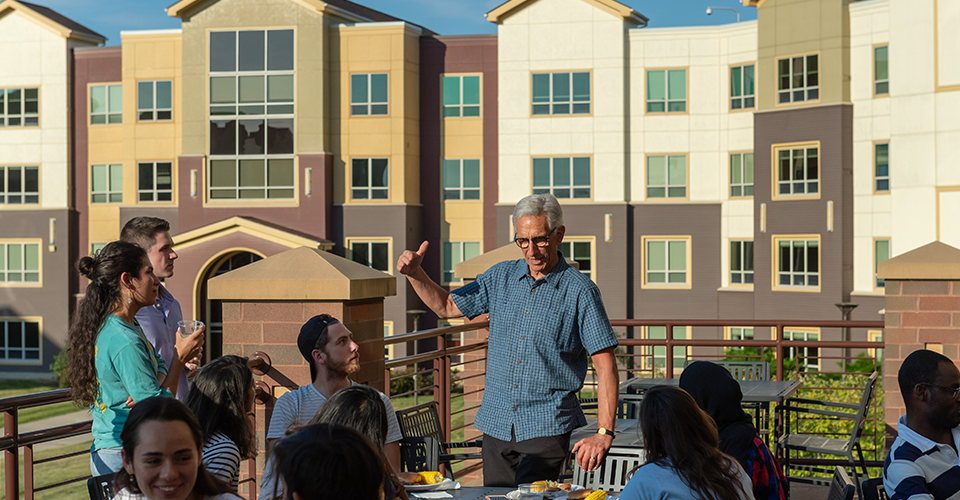 Picnic with the President

When President Gershen moved into The Village at NEOMED last year, one of his favorite things about it became the walks over to campus and back.

It wasn’t just because this is the quickest commute to a job that he has ever had – though that was a plus. More than that, he has relished the chance to have impromptu conversations with students headed in the same direction.

For Dr. Gershen, leading NEOMED for the last decade – a period that will come to a close with his retirement Sept. 30 – has been all about the students. So it was fitting that a large group of them gathered outside at The Village for a picnic with him on Tuesday, Sept. 10.

One eager student ran up to him as he mingled, asking, “Can we get a picture?” and that was the friendly vibe at this event.

Dressed for the warm weather in a short-sleeved shirt, shorts and boat shoes, Dr. Gershen chatted with students as they went through buffet line of picnic food (including vegan pulled chicken) and then worked his way around the individual tables where they were sitting. Paul Lungu, a first-year College of Pharmacy student, remembers the positive first impression he gained of Dr. Gershen when he was an undergraduate and attended a Research!America event at NEOMED.  It has been borne out, said Lungu: “He’s a very personable and encouraging person,” Lungu said.

Anibelky (Ani) Almanzar, the second-year College of Medicine student who had asked for the photo, expanded on that. “We’re part of the NEOMED-Cleveland State University Partnership for Urban Health,” she said, gesturing toward her friends at the table, “and he has been so supportive of us.”

Seated next to Almanzar, Aviva Aguilar, another second-year student in the College of Medicine, said that she has consistently been impressed by Dr. Gershen’s dedication to underserved and minority communities. “He has lived his mission,” she said with conviction.

“The partnership and scholarship opportunity President Gershen created with Mercy Health Hospitals has helped many students like us,” she said, gesturing to fellow second-year College of Medicine student Anna Cherian.

Seated at another table were students from yet another group that Dr. Gershen has supported: a  cohort of learners from Anhui University in China, who are here for the year to observe College of Pharmacy classes. Taotao (Carmen) Ma, who was attending with her kindergartener son, Kevin said that earlier in the day, President Gershen had hosted them for a lunch, showing interest in everything from their impressions of the American approach to teaching and learning to the places they hoped to visit while in the U.S.

“Everything that I do now is a ‘last,’” said Dr. Gershen a bit wistfully as the event wound down, adding that he’s feeling positive about NEOMED’s direction. And while he believes in all the metrics used to measure academic success, he said, there’s nothing like talking to the students – like the ones at the picnic – to keep in touch.

Register for the reception

All are invited to a reception Wednesday, Sept. 25, in the atrium of the NEW Center to honor Dr. Gershen on his retirement.

WHAT: Reception to honor Dr. Gershen on his retirement