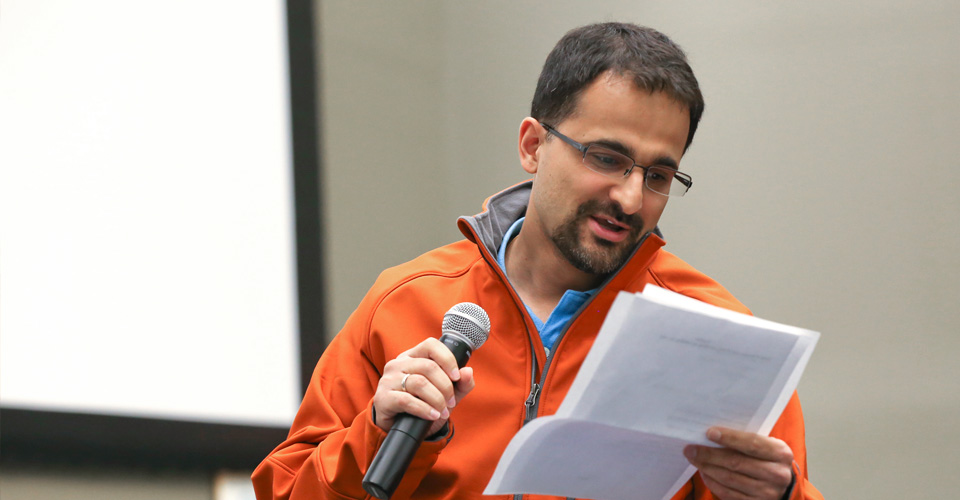 What’s it like to be the Poet Laureate of Ohio while simultaneously pursuing a successful career as a diagnostic nuclear radiologist?

The NEOMED competition is named for the late American physician William Carlos Williams, who became widely known as a poet. Each year, the contest draws medicine students from across the country who are interested in connecting the humanities with medicine. This year’s winners included students from Columbia University College of Physicians & Surgeons, New York; Rutgers-Robert Wood Johnson Medical School, New Jersey; New York University School of Medicine, Warren Alpert Medical School of Brown University; and Drexel University College of Medicine in Pennsylvania.

In addition to reading aloud to the students, faculty and staff who had gathered, Dr. Majmudar also spoke at length to answer students’ questions about how he has found his own voice at the intersection of the arts and medicine. The NEOMED alumnus’ approach was simultaneously humorous and thought-provoking. On several occasions, Dr. Majmudar’s remarks were met by laughter, quickly followed by silence as the audience as they considered the deeper meaning of each topic he raised.

The three prize winners of this year’s national competition were announced at the event, along with honorable mention winners: