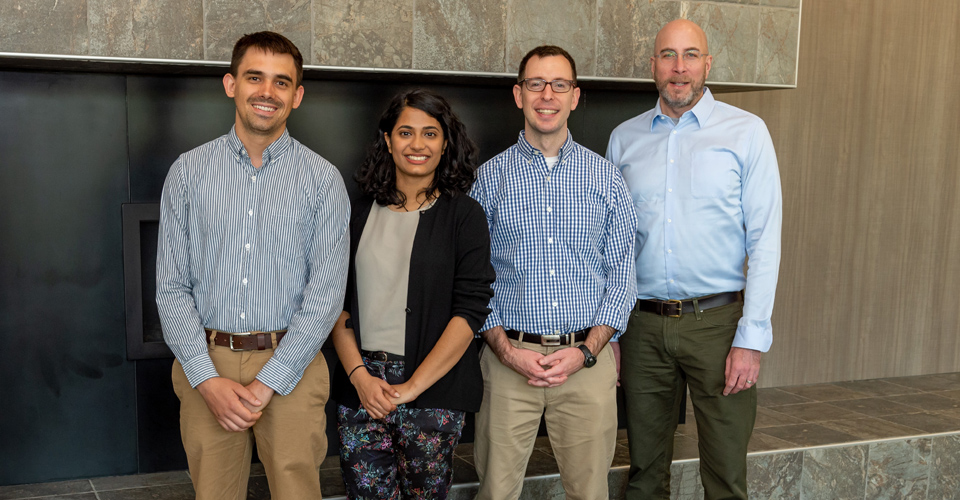 Sean McEvoy had always been a writer, but he stopped when he got to medical school. The third-year student at the University of Arizona College of Medicine-Tucson didn’t realize how much he had lost—at first.

“In your third year, when you’re around death a lot, it’s important to have a way to process it,’’ McEvoy told the large group of first-year College of Medicine students attending the lunch and awards program for NEOMED’s William Carlos Williams Poetry Competition, now in its 36th year. McEvoy was first-place winner in the annual competition, which this year attracted more than 200 entries from medical students around the country.

McEvoy (photo, far left) attended the awards event at Watanakunakorn Auditorium April 27 along with second place winner Adam Lalley (photo, second from right), a second-year student at the Donald and Barbara Zucker School of Medicine at Hofstra/Northwell (New York); and third place winner Poorna Sreekuman (photo, second from left), a second-year student at the University of Maryland School of Medicine in Baltimore.

Each of the three winners took a turn talking about their writing and reading from their own work. McEvoy told the audience he never used to share his poetry with his parents, but he did after winning the NEOMED competition. Their first response, he joked, was to ask if there was something wrong with him, because of the dark emotions he addressed. But that’s one of the best things poetry gives him—an outlet to honestly address the difficult emotions that go along with working in a place where death is always around the corner. You may not always be able to save your patients, and that’s definitely not easy, McEvoy said. Poetry helps.

The Meaning Between the Words

Jay Baruch, M.D. (photo, far right), is an associate professor of emergency medicine at Alpert Medical School at Brown University, where he’s the director of the Medical Humanities and Bioethics Scholarly Concentration. He’s also a writer whose books of short fiction include What’s Left Out and Fourteen Stories:  Doctors, Patients, and Other Strangers.

As the April 27 event’s guest speaker, Dr. Baruch encouraged the students to keep a journal, to "carve out the time to write," to show their work to someone else, and to read their work to an audience and watch the response.

He shared his personal experience of taking a year off from medical school to write, during which he realized something that changed his perspective. Patients come with stories that are like first drafts, said Dr. Baruch. What they don’t say—the meaning between the words—is also vitally important.

People talk about the humanities as being comforting, and that’s true, he said—but there’s more. Paying attention to what is unsaid by patients is also a critical clinical skill.

Is it important for a physician to be a good listener? Experience in delivering devastating news that a family will remember for the rest of their lives has convinced Dr. Baruch that the answer is yes.

When I Saw the Table

under a bright quilt and
shadowed cup of sunflowers golden
red, I thought it was a place
worthy to wait for death.
A plate of fruit and thick slice
of cake so patient and
loving, just for me, beside the
sugar dish and cream. It seemed only fair
to eat slow and sit, and
I remembered the man – sick,
given a few weeks to live
as his throat closed itself.
He decided to leave unannounced.
Lines on the floor
and a trail of blood drops down to Broadway –
He never came back. I imagine
a mountain, a forest, and maybe a
great stone slab on which to lie,
hearing the buzzing shapes of insects
as I sat still,
calmly becoming an offering myself.