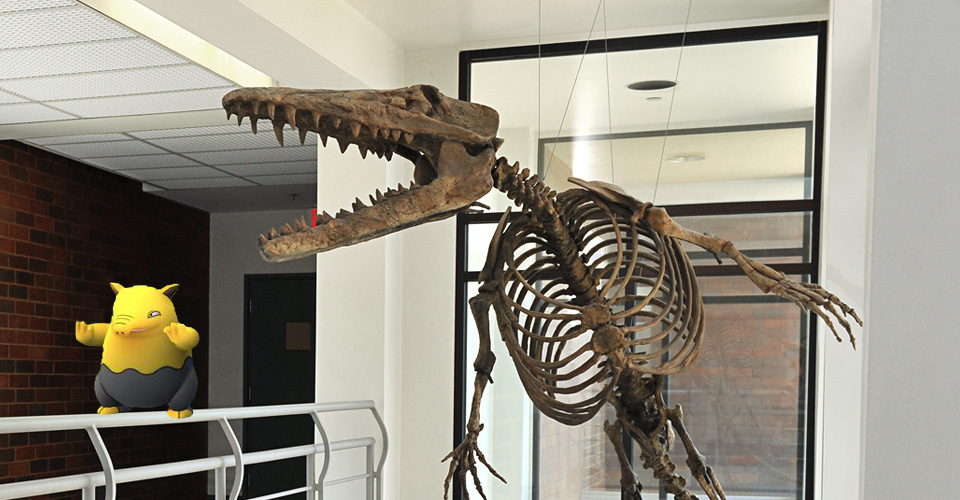 Pokemon GO, the popular game that uses GPS to allow players to catch Pokemon at popular landmarks, does more than provide entertainment. It has also helped Gary Theiss, a member of the cleaning crew at Northeast Ohio Medical University, lose inches off his waist.

“I went from a 48-inch waist to a 44-inch waist from all of my walking,” said the Pokemon GO enthusiast, who grew up watching the anime series. “I used to just order pizza on the weekends.” Theiss has walked 108.47 kilometers (about 67 miles) since he started playing the game in July. The Akron native has even developed a favorite walking trail to catch Pokemon at the Goodyear Heights Metro Park.

As part of the game, players create an avatar and join one of three teams: Valor, Instinct or Mystic. To play, they walk around to find pokestops, battle at gyms and catch Pokemon that then evolve into new species. NEOMED’s campus is home to three pokestops: the Ralph Regula Center; the walking whale skeleton located in the Dr. Chatrchai and Eleanor Watanakunakorn Medical Research Building in lower F; and the Theodore J. Hayes Memorial rock located just outside the C building, by the physical plant.

A member of Team Mystic, Theiss has become hooked on the adventure of the new game. “I get to find new places I have never heard of by exploring for Pokemon,” said Theiss, whose favorite Pokemon is Sandslash. “It has become more of an instinct now and it’s fun.”