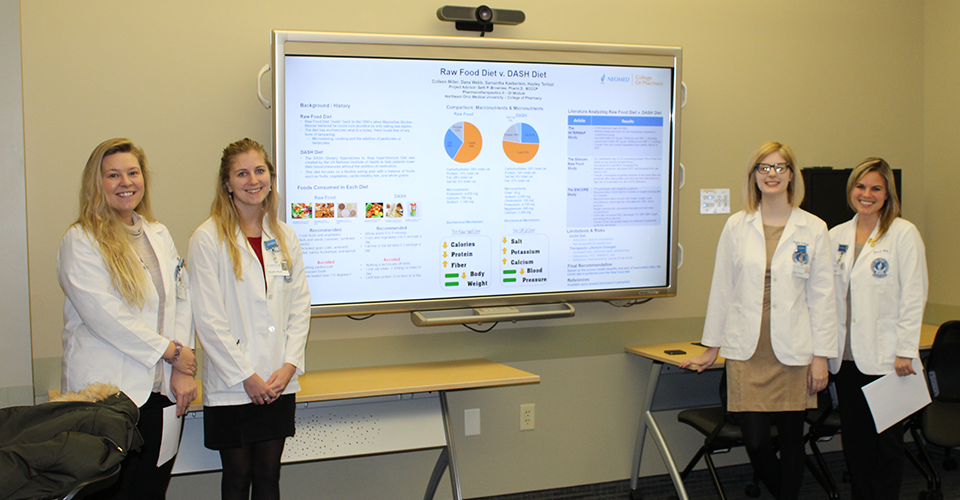 Early in December, Hayley Terlezzi (second from right in photo) was one of a group of third-year pharmacy students explaining the deep dive they had taken into the world of fad diets.

At their annual fad diet presentation, the third-year students were ready to present their evidence-based research – and to explain it to laymen. Members of the public were welcome to attend the three-hour event held in classrooms of the NEW Center. Teams of students set up shop with their poster presentations to talk and answer questions from anyone who stopped by – including faculty, such as Seth Brownlee, Pharm.D., the course director for a pharmacotherapeutics course for third-year pharmacy students.

Terlezzi’s group compared the  DASH (Dietary Approaches to Stop Hypertension) diet created by the National Heart, Lung, and Blood Institute to help prevent and control hypertension (high blood pressure) with a raw food diet. By that, it’s meant fresh foods that haven’t been altered by microwaving, cooking or the addition of pesticides or herbicides. So, that means fresh fruits and veggies, nuts and seeds, and uncooked grains.

"People might think the raw food diet is really healthy, but it may lead to vitamin deficiencies," said Terlezzi. The group’s research found that a raw food diet could lead to deficiencies in Vitamin B12, Vitamin D and iron, weak bones, ceasing of menstruation, and food poisoning (due to the toxicity of raw foods).

And while the DASH diet reduces salt intake, the raw food diet goes even further, cutting it to half as much as what’s allowed on the DASH diet – which may be hard to do, and without additional benefit.

Why try either one?

Following the raw food diet will help you lower calories and protein, increase fiber intake and in the end, lose weight. Adhering to the DASH diet will lower salt while raising potassium and calcium, with an end result of lower blood pressure. With the proven health benefits and lack of associated risks, the DASH diet is preferable to the raw food diet, Terlezzi’s group concluded.