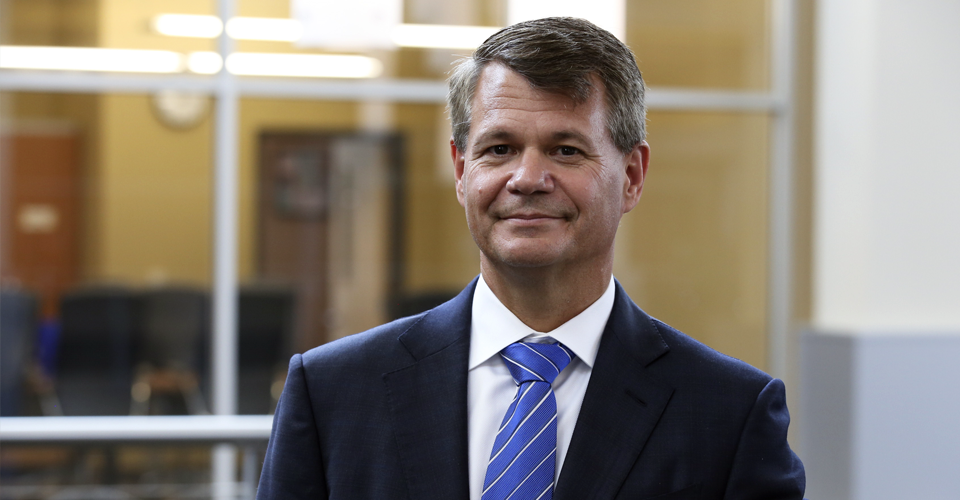 John Langell, M.D., Ph.D., M.P.H., M.B.A., says he isn’t fussy about how people say his last name. But if you’re curious to know, the newly appointed president of Northeast Ohio Medical University pronounces it LAN-jel, with the emphasis on the first syllable. Though he’s easygoing on that topic, the long list of degrees after his name – not to mention his accomplishments in academia, clinical practice, medical innovation and military service – suggest that NEOMED’s next leader has always pushed himself to excel.

Dr. Langell joins NEOMED today, Oct. 1, after serving as vice dean of the medical school and executive director of a medical innovation organization that he founded at the University of Utah.

A self-described lifelong student, Dr. Langell’s professional experience ranges from expertise as a minimally invasive gastrointestinal and endocrine surgeon to serving in the Air Force (active and reserve) and as CEO of four government health care facilities, overseeing more than 500 health care providers.

With a welcoming smile and direct gaze, the new leader first met with students, faculty and staff at NEOMED on July 24, after the Board of Directors approved his appointment as the successor to President Jay A. Gershen, D.D.S., Ph.D., who announced last year that he would retire as of September 30.

In one of his most extended comments to the group in July, Dr. Langell told the faculty about a multidisciplinary team he set up at the University of Utah when a board member gave him a challenge: Assemble a group of students to create a solution to aid in the prevention of cervical cancer – and have a functional prototype ready in three months. The students succeeded in inventing a product called the Cinluma thermocoagulator, now used internationally, that can  prevent the development of cervical cancer – by giving a physician the ability to ablate (destroy) pre-cancerous lesions .

He always wants to make an impact, Dr. Langell told the campus community.

Willing to take a risk

The physician’s parents came from “different sides of the tracks” in Michigan, Dr. Langell said in an extended interview the day after his appointment was announced. His mother descended from a prominent family for whom the city of Ludington, Michigan is named. (According to Wikipedia, an ancestor named Sybil Ludington undertook a ride similar to that of Paul Revere in Revolutionary War days.) Dr. Langell’s father’s side of the family were boat workers in Marine City, Michigan.

The new president’s own work ethic surfaced in conversation when he described ways NEOMED could achieve increased financial independence. Key opportunities exist in research and innovation, such as at the REDIzone® – NEOMED’s incubator that enables innovators of biotechnology to take their research from concept to capital – said Dr. Langell.

NEOMED’s current financial model — tuition and funding research through federal grants — needs revision, Dr. Langell said. “I think what we need to do is reach out to a new model, and that is to create win-win situations with our industry partners. And academics have a hard time with this sometimes. I think it’s because they see a conflict of interest. Some of them see commercialization as this evil thing: We’re not out to make money; we’re supposed to be academics.  But what is our primary goal as a university? It’s to create and educate the human capital that delivers health care to the community or fulfills the requirements of companies to provide economic development, and that’s the reason states invest in us.

“Additionally, this is something that the National Science Foundation has been a leader in, and now the National Institutes of Health. They’re recognizing that this is the direction we need to go in.

“What I was able to do at the University of Utah was to build an ecosystem where we brought in well over 60 company partners, aligned our programs with government initiatives for growth in the life science sector, and leveraged university resources, talent and philanthropic funding to grow what turned into a very big enterprise. The student programs alone, just the student programs in the past seven years, have generated over 100 patent filings, 39 sustainable student startup companies. The I-Corps program that I ran there has been up and running for five years only, and in that period of time, we trained 120 faculty in innovation core concepts. They’ve started about 21 companies with over 40 employees and an excess of $15 million raised in seed capital.

[Editor’s note: Read here about how the research team of Fayez Safadi, Ph.D., participated in ICorps@Ohio.]

“So, these programs work. They bring in companies that see value in what you’re offering: things they don’t have, like access to verification and validation testing, key opinion leaders, experts in research, regulatory teams – and they want to come in and work with us. They get value from that and they’re willing to pay for that. In return, we’re not only helping them accelerate their product development and validating their products. We are also training students in their particular field that they want to hire, as their engineers, their business experts, their regulatory experts.

“It just has to be done in an appropriate way so the benefit you’re giving them is real. Your programs can’t be set up as academic programs. They have to be set up to meet industry standards, so that the work you’re doing actually translates into the abilities of these companies to move forward.”

The conversation turned to other topics, edited and condensed here.

What are your thoughts on women in STEM?

I’ve worked very hard to get diversity into my programs. One, because it’s the right thing to do and two, because the programs actually benefit more from it. It’s that diversity of thought and opinion that allows us to accelerate in creativity. We actively push to bring not just women and underrepresented minorities into our programs but to put them into leadership positions, in programs like one I created, the Bench to Bedside competition – a student-driven, seven-month innovation program.

My oldest daughter, Ashley, was a medical student and did an extra year of training in BioInnovate, a master of bioengineering degree track at the University of Utah. It’s a one-year intensive program and they take a year off of med school to do it. She was on part of the team that created the thermocoagulator. As a father, that was wonderful to watch. (In addition to Ashley, Dr. Langell has five other children, including two younger daughters – Sydney, 12, and Grace, 9 – with his wife, Sara Whittingham, M.D., an anesthesiologist.)

In brief, what do you see as your first steps at NEOMED, including at the REDIzone®?

It’s always fun to come in and say you’re going to make massive change, but nobody likes that and if it’s not thoughtful, it can be a big mistake.

My first intent is to spend three to six months on a listening tour, getting to know the internal community – what they think is working well, what they think the strengths and weaknesses are. Do the same thing with our external partners, both community and academic. And then begin formulating ways that we can work together to grow the programs.

That said, I know the concepts behind the REDIzone® and it’s going to be an immediate area of focus for me. Really hitting the ground running and growing that program.

The other key piece is understanding our clinical partners and our operational efficiencies. My approach is always the lean approach. It’s to go in and create a culture where we understand that this doesn’t mean job cuts; it means all of us working together to find ways to be more efficient and deliver the value that we offer, which is service, research and education.

Any general thoughts about curriculum?

I think in order to change health care as a university, you do it by creating the future leaders. I want to introduce business of medicine and leadership curriculum into programs in both the College of Medicine and the College of Pharmacy. One reason that health care is in a crisis is because it was traditionally run by physicians that were not trained in the business of medicine.

The other area I’m interested in expanding is the Master of Public Health degree, specifically with an emphasis on global and rural health care.

Are you aware that NEOMED is the lead grantee on a program to develop an opioid curriculum for the state of Ohio? Any thoughts about that?

Yes, I read about that. It has actually become a public health emergency. An interesting article came out very recently about the decline in life expectancy of Americans. There are three things that are attributed to the thing that we are actually experiencing a three-year decline. One of those was deaths due to opioid abuse. There’s an over 30 percent increase in the number of patients coming in with opioid overdoses, across the country, compared to past years. This is a critical issue. It was roughly the late '90s that we saw a massive increase in the number of opioid prescriptions being written. And that has been a gateway to non-prescription as well as prescription abuse. It’s an area that we have to tackle. So, I think it’s wonderful that NEOMED is stepping out into this particular area.

We’ve talked about a lot of things. Is there something we haven’t covered that you’d like people to know about you?

I want to create opportunities for advanced degrees for pharmacy and medical students, and to create master’s level degrees to support the growth of the industry supported by the REDIzone – like a master of regulatory affairs degree, which is probably THE most needed body of expertise in the U.S. life science sector right now.

Something that’s a real focus for me from the perspective of students is ensuring that we’re creating educational programs that prepare them to be the future leaders of health care – regardless of what field they decide to go into.