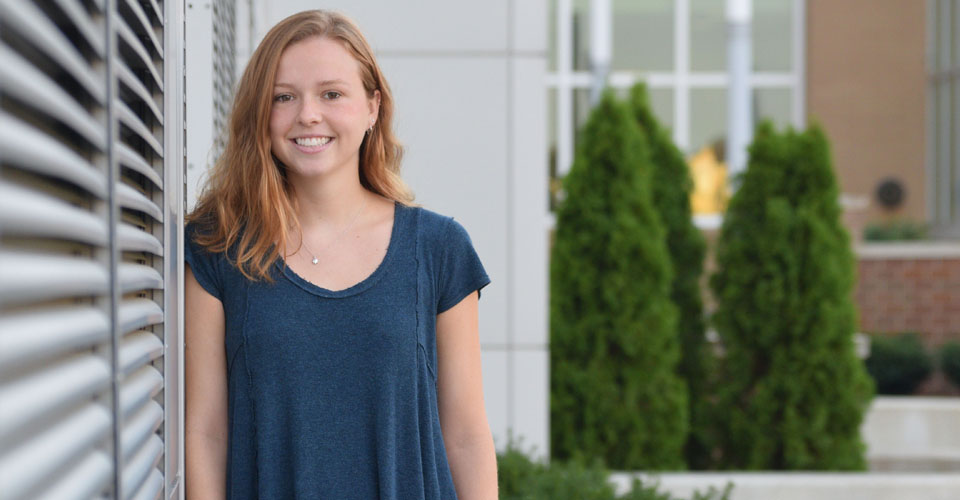 As an undergrad, Emily Sullivan spent her summers at Cincinnati Children's Hospital Medical Center doing research. Now a second-year College of Medicine student, she still dedicates her summers to research.

This past summer, Sullivan participated in Northeast Ohio Medical University’s Summer Research Fellowship Program. She teamed up with Patrick Kang, Ph.D., a research assistant professor of integrative medical sciences at NEOMED, to study mitochondrial disease, a condition when you have low energy and the cells in your body can’t produce the energy that you need. She was recognized in August for her outstanding poster presentation on “Induced Pluripotent Stem Cells as Models for Studying Mitochondrial Disease” for the Summer Research Fellowship Program.

“This project takes a precision medicine approach when studying mitochondrial disease, meaning each patient is looked at as an individual and treated for their specific symptoms. Right now, we don’t know a lot about mitochondrial disease and the different mechanisms by which it occurs. There’s a list of 10 medications that they give to patients in sort of a trial-and-error fashion. But it takes a few months – sometimes years – for them to figure out if the medication is working or not. They haven’t found anything that’s been able to help stop the progression of the disease, yet. They’ve only been able to slow it down,” says Sullivan.

“Before I got started on our project, Dr. Kang took cells from mitochondrial disease blood, isolated them, and then reprogramed them into induced pluripotent stem cells. Over the summer, we studied the function of those cells that can replicate indefinitely and give rise to every other cell type in the body. We were able to then reprogram them into cardiomyocytes – the muscle cells in your heart that allows it to beat – that were actually beating.

“If we’re able to isolate cardiomyocytes in each patient, we could put in different inhibitors of the electron transport chain and stuff that will affect myocardial function. We use a machine that analyzes mitochondrial function in patients’ cells and what happens to those different inhibitors and medications in mitochondrial function. We leave one port empty so they can use these cells and then put in a medication and see how it affects those cells. This way, they can test those medications outside of the patients’ bodies. The process still takes up to six months, but that could still be a lot faster than trying over and over again for years,” explains Sullivan.

Sullivan says she has found an appreciation for the research profession through her experiences at NEOMED.

“I’ve had the opportunity to get an insight of what academic medicine is like. Although I see myself having more of a clinical career, I think it’s important to be knowledgeable about all aspects of medicine. As a future physician, it’s likely that at many points, medications will change as a result of what people are doing in the lab. To be knowledgeable about how medicine is progressing is important,” she says.

Research isn’t the only thing Sullivan has taken an interest in. Women’s health has become a point of interest for her. As the vice president of NEOMED’s American Medical Women’s Association (AMWA) chapter and Obstetrics and Gynecology Interest Group, she is becoming an advocate for the field.

“Before I came to NEOMED, I did a lot of shadowing in OB-GYN and really became interested in women’s health. AMWA is really cool because it’s a national organization and they have chapters at so many medical schools across the country. It’s like a big support network. We get to talk about some of the challenges that women face in medicine,” says Sullivan.

She’s had the opportunity to attend several Women in White Coat networking dinners with local female physicians and surgeons; to learn from female NEOMED alumni; and to help run the Mr. NEOMED pageant which has raised funds for Town Hall II, a program in nearby Kent, Ohio, that offers violence and sexual assault prevention, health education programs and a 24/7 crisis helpline.

This busy student also enjoys serving as a peer advisor for first-year College of Medicine students, following up on the help she received from her own peer advisors last year.

“At the beginning of each semester, I always feel lost because when you start a new class, you don’t know what it’s going to be like, how to approach it, or what the best study strategies are. It’s really helpful having someone to give advice on what types of resources to use. I want to be able to offer that same advice to the class below me,” she says.