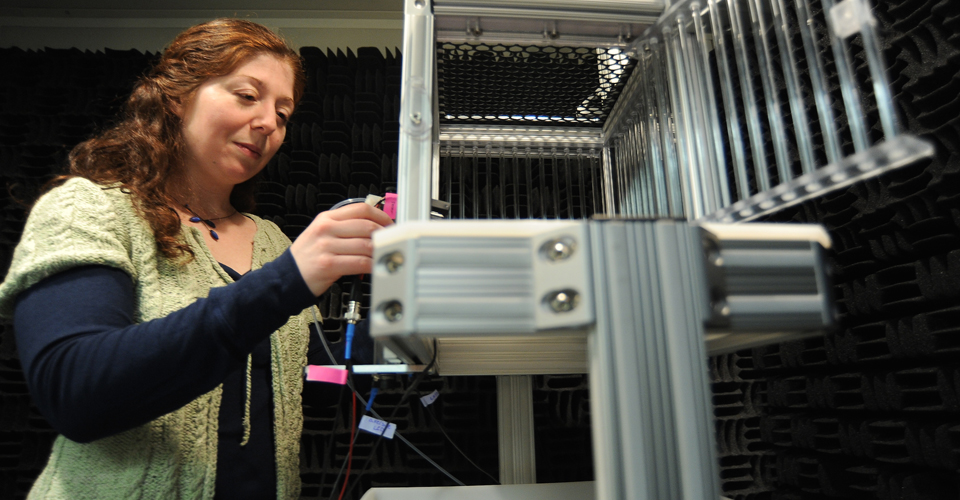 Researchers know that profound hearing loss in children can produce long-lasting deficits in auditory perception and language acquisition. Merri Rosen, Ph.D., an assistant professor in the Department of Anatomy and Neurobiology, has reason to believe that mild to moderate hearing loss, including that commonly associated with middle ear infections, may also have a detrimental effect. Her research examines how early experiences can cause later problems with speech, and potentially how to fix these problems.

Dr. Rosen’s work is motivated by research showing that due to a lack of resources, treatment and care, children in lower socioeconomic populations have an increased risk for hearing loss stemming from ear infections. Children from more financially stable families are more likely to receive proper or enhanced treatment, resolving any issues before they create lasting problems with speech perception. In addition, stress experienced by children in these adverse environments increases the risk of later perceptual issues. It is well known that chronic stress in children can have lasting physical and psychological effects, but Dr. Rosen’s research suggests that the problem may be even simpler – there may be problems within the brain as it recognizes and processes speech.

Dr. Rosen’s lab investigates how auditory perception and the neural activity underlying perception are influenced by early hearing loss and stress. To conduct the research, Dr. Rosen and her students, including two Ph.D. candidates from Kent State University’s Biomedical Science program, are examining development in gerbils as they age—similar to how children transition into adolescents, then adults. To observe and track this maturation, Dr. Rosen and her team place gerbils in soundproof enclosures where a computer generates various sounds to test each animal’s sound perception, and to measure the neural responses that allow that perception. Their work suggests that deficits in speech perception may be helped by specific types of exposure to sounds, and is exploring how this remediation changes the brain.

Dr. Rosen came to NEOMED in 2010 when she was recruited to join the Hearing Research Group, one of the University’s five areas of research. Earlier, the Boston native pursued an education in neuroscience, earning a master’s degree at Brandeis University and a doctorate from Duke University. Dr. Rosen later conducted postdoctoral research at Cornell University and New York University.

Dr. Rosen’s time and efforts weren’t always dedicated to neuroscience. She is an oboe player who considered a professional career as a musician – that is, until her background sparked an interest in musical perception and how the brain processes sound, leading to her current research. Although she hasn’t recently been able to dedicate much time to playing, Dr. Rosen intends to revisit her passion for the oboe down the road, and enjoys living in an area with easy access to a wide range of musical performances.

In the meantime, Dr. Rosen keeps busy running half-marathons, conducting research, and hosting “Brains on Tap” events—TED-style talks by scientists around Northeast Ohio. In conjunction with the Northeast Ohio Chapter of the Society for Neuroscience, NEOMED and Kent State University, Dr. Rosen arranges these informal discussions of science at local venues in Kent, Ohio.