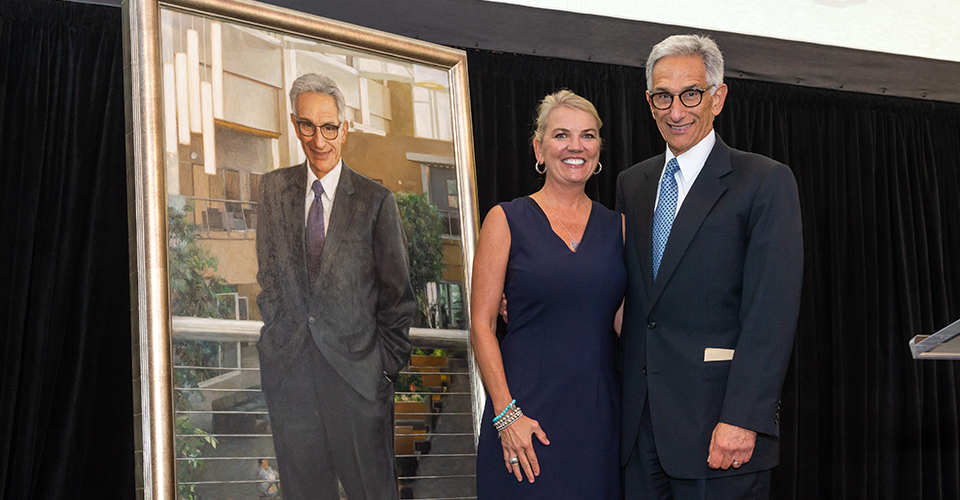 “Thank you for being so nice to me. God bless.”

With those words, Jay A. Gershen, D.D.S., Ph.D., brought his nearly decade-long role as president of NEOMED to a heartfelt close.

Moments earlier, at a festive reception packed with more than three hundred students, faculty, staff, community members and all manner of leaders, Paul Bishop, J.D., chair of the NEOMED Board of Trustees, had announced that the NEW Center atrium would be named for Dr. Gershen, honoring his leadership from Jan. 1, 2010 through Sept. 30, 2019. When a curtain was pulled to reveal the gleaming silver letters spelling out JAY A. GERSHEN ATRIUM on the sign above him, Dr. Gershen clasped his head, as if in shock, then reached for his wife, Carol Cannon, seated next to him.

It was an evening of high spirits (“I thought this was a roast,” joked past Board of Trustees chair Robert Klonk) as well as warm emotion from speakers like William Considine (CEO emeritus of Akron Children’s Hospital, a longtime NEOMED hospital partner) and Mary Woolley, president and CEO of Research!America, who had traveled from the advocacy group’s headquarters in Washington, D.C., to pay tribute to her longtime colleague.

Soon after the 4 p.m. start time of the event on the first floor of the NEW Center, an impromptu reception line began forming. Everyone, it seemed, wanted to be sure to have at least a moment for a personal  goodbye to the person who had guided NEOMED through so much growth. Summit County Executive llene Shapiro and GAR Foundation President Christine Amer Mayer stood in line along with current and former members of the University board and the NEOMED Foundation board, as well as people from every corner of Dr. Gershen’s life.

Among those who spoke at the program beginning at 5 p.m. was Corrie Stofcho, M.D. (’06), president of the NEOMED Alumni Association, who commented on the remarkable transformation she had seen on the formerly “sleepy” (her words) campus, thanks to Dr. Gershen’s leadership.

Speaker Para Jones, Ph.D., president of Stark State College, energetically saluted Dr. Gershen for his vision. Ticking off the names of the many Northeast Ohio counties that have collaborated with NEOMED during Dr. Gershen’s tenure, Dr. Jones said the University was like the United Nations.

In addition to the news of the atrium naming, Dr. Gershen received one more surprise. NEOMED Foundation board chair Bruce Sherman announced that the suite in The Village where Dr. Gershen lived among NEOMED students for most this year (after he and Carol sold their house) has been named the Gershen Suite. Donations from faculty and staff and a contribution from NEOMED Foundation made the naming possible. When all of the tributes were over and Dr. Gershen went to the podium, he confessed, “I think for the first time in 10 years I’m speechless!”

Then he found not just the words, but the ways to thank and acknowledge group after group: longtime now-retired colleagues who had returned to honor him; Michelle Mulhern, the current chief of staff who worked side by side with him in the President’s office; faculty and students who operate a student-run free clinic; the students he works out with at Sequoia Wellness; faculty and staff attending the party; and more.

During his time at NEOMED, said the former New Yorker, he got to know and appreciate what people meant by Midwest Nice.

“I love you and I love my family,” he said, beaming at Carol. Leaving wasn’t an easy choice, his expression said – but what a way to go.

If you were unable to attend the event, you can view a video of the reception below.