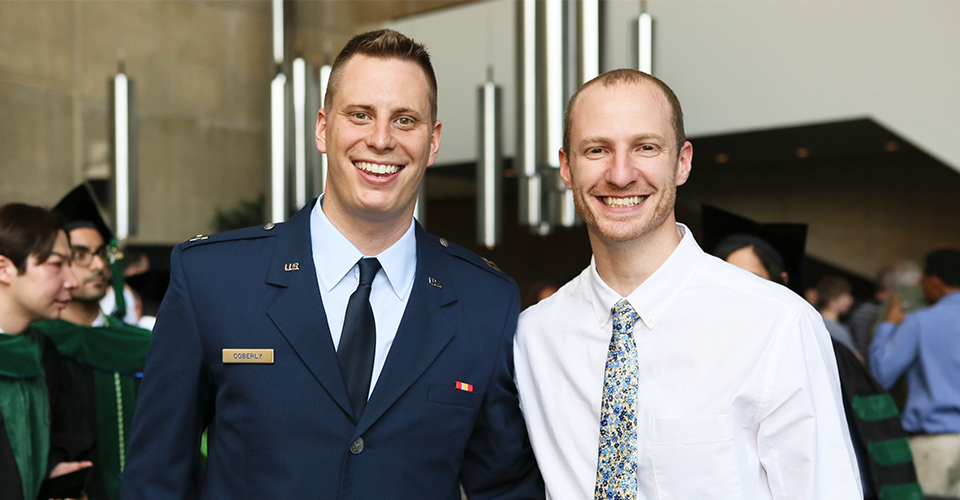 Scott Coberly, Pharm.D. (’19), reached a significant milestone on May 18, 2019, when he collected his Doctorate of Pharmacy degree at NEOMED’s Commencement. On that day, Dr. Coberly also earned the distinction of becoming the first member of the military – namely, the U.S. Air Force – to graduate from NEOMED’s College of Pharmacy.

The story began following Dr. Coberly’s P1 year, when his brother, also a member of the Air Force, introduced him to a friend who was a major and pharmacist in the Air Force. After spending time shadowing the major at McGuire Air Force in New Jersey, Dr. Coberly chose to apply for the Air Force’s Health Professions Scholarship Program.

Once he was accepted, Dr. Coberly was able to spend the rest of his time at NEOMED focused on his studies.

“It was nice to not have to stress about internships, job applications or residencies and just focus on school after finishing my Air Force application,” says Dr. Coberly. “There was a little extra pressure, or maybe call it encouragement, to stay in good physical condition and to maintain good standing with academics. Now I’m excited to start my career as a pharmacist and an officer in the USAF and to see where this career takes me.”

Dr. Coberly is among several members of his family to devote themselves to public service. His father served for 27 years in the FBI, while his brother and sister-in-law are both captains in the Air Force. His younger brother is a graduate of the Naval Academy who now serves as a platoon commander in the Marine Corps. Dr. Coberly also has cousins who are active members of the Army and Navy – and both of his grandfathers, not to mention two uncles, served in the Navy. (Dr. Coberly hated to exclude his last brother, who works for First Energy from this long list. “I consider him as aiding in service to your electrical needs,” he joked.)

Dr. Coberly started off as a second Lieutenant in the Air Force, but upon graduation, he was promoted to captain and formally pinned as captain during a ceremony at Commencement. He is now waiting to learn the date (sometime between October and January) when he’ll be required to report to Total Force Officer Training in Montgomery, Alabama. Following training, Dr. Coberly will report to Hanscom Air Force Base just outside of Boston, where he will be joined by his fiancée, Kaitlin Patterson, Pharm.D. (’18).

While a bright and exciting future lies ahead for Dr. Coberly, he’ll always look back fondly of the memories and relationships he made during his four years at NEOMED.

“I would be remiss not to mention all of the wonderful time spent with my amazing mother and father over the last four years while living beneath them, in the lower level of my childhood home but my favorite memory of NEOMED is probably the lifelong friends I gained while earning my doctorate and the times I spent with them, Dr. Coberly says, adding “Plus, I found my beautiful future wife here – so that’s not too bad either!”