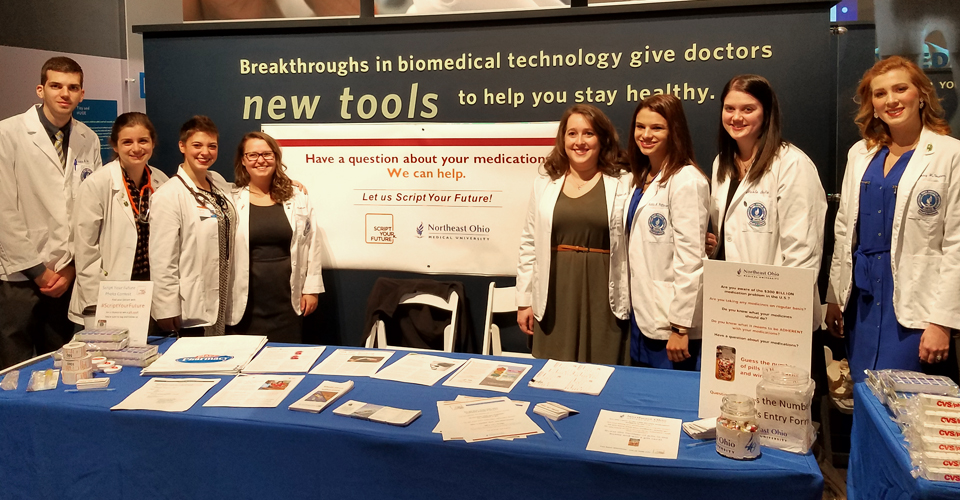 Research shows that nearly three out of four Americans don’t take their medications as directed. Students from the College of Pharmacy took action by participating in the Script Your Future Medication Adherence Team Challenge and left their mark.

The NEOMED student team won multiple national awards during the sixth annual challenge, which was designed to raise public awareness about the importance of medication adherence. Wins included the National Challenge Award; the Health Disparities/Under-represented Community Outreach Award; and the Communication and Media Outreach Award.

NEOMED was one of 66 health care educational institutions to participate and the only pharmacy college or school from Ohio to win an award, topping all other participants with three awards.

“Medication adherence is both a critical issue here in Northeast Ohio, and a wonderful opportunity for our students, faculty and local pharmacists to enhance involvement in patient care,” says Daniel L. Krinsky, M.S., R.Ph., associate professor in the College of Pharmacy. “Our student participation in the 2017 Script Your Future campaign, led by our Script Your Future student champion Kaitlin Patterson, was absolutely phenomenal.”

The awards will be presented in July at the American Association of Colleges of Pharmacy (AACP) meeting in Nashville.