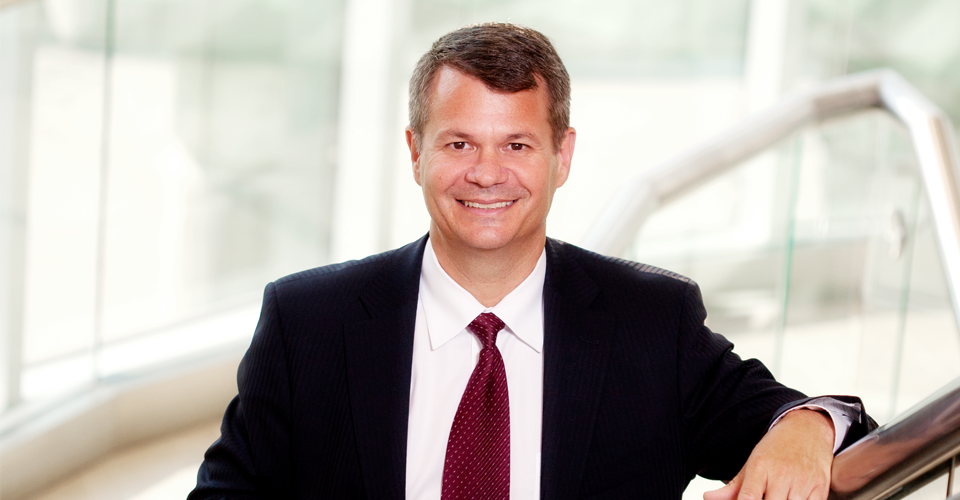 He’s a surgeon and a triathlete who would like NEOMED to set a national benchmark. He’s a husband and a father of two who celebrates the birthdays of the family pets — a Weimaraner and a horse.

A self-described “startup guy” who has spent decades in academic health care, he’s the vice dean for the School of Medicine and the founder and executive director of the Center for Medical Innovation at the University of Utah.

And with a vote by the NEOMED Board of Trustees July 24, it was official: John Langell, M.D., Ph.D., M.P.H., M.B.A., will become the seventh president of NEOMED, effective October 1. Dr. Langell (pronounced LAN-jel), 55, will succeed President Gershen, who announced last year that he would step down September 30 after a decade of service.

In meet-and-greet sessions Wednesday, Dr. Langell spoke one-on-one with faculty, staff and students. He also responded to questions from the groups.

“I’m thrilled to be part of this amazing team,” Dr. Langell told one of the groups assembled at Watanakunakorn Auditorium.

What drew him to NEOMED? “It’s nimble,” he said. While NEOMED isn’t exactly a startup (“It’s at mezzanine level,” he said), its smaller size makes it more capable of achieving change than larger institutions.

Midwestern hospitality is real, said Dr. Langell, who said he and his wife, Dr. Sara Whittingham, an anesthesiologist, have encountered it already. When an offhand comment at the DMV brought the couple advice from clerks and customers alike on the best places to live and for their daughters Sydney, 12, and Grace, 9, to go to school, they knew the stereotype was actually true.

Until now, Dr. Langell has spent his career closer to the edges of the country than the middle. He earned his M.D. and Ph.D. from Drexel University in Philadelphia and a Bachelor of Science degree from the University of California at Los Angeles. He has been the director of acute care surgery at the University of Utah and chief of general surgery at the George E. Wahlen Department of Veterans Affairs Medical Center, in addition to his more recent positions.

Getting to know the Midwest and more specifically, NEOMED’s partnerships, will be key to the transition process, he said. It will be important to understand the nuances of those relationships: “They’re not just data points,” he noted. Dr. Gershen, Chief of Staff Michelle Mulhern and Dr. Langell will work with the leadership team to accomplish the transition before his first day, October 1.

Dr. Langell offered concise answers to a number of other questions raised at the Watanakunakorn meetings on Wednesday.

What will be his greatest challenge? Managing partnerships, he said. NEOMED has many, and it makes sense to review them to see which are the strongest.

Does he plan to expand the faculty? The Board of Trustees has already authorized five new faculty positions and will be looking to expand further, Dr. Langell said.

What is his impression of the students here and the challenges they face?

With limited conversations so far, Dr. Langell said he’s noticed a shortage of identification with the institution – a quality that he’d like to bolster.

He also touched on his views on the changing role of libraries; of the concept of globalization at universities; and his own personal credo, borrowed from the U.S. Air Force, for which he served in active duty and as a Reservist: Integrity first, service before self, and excellence in all we do.