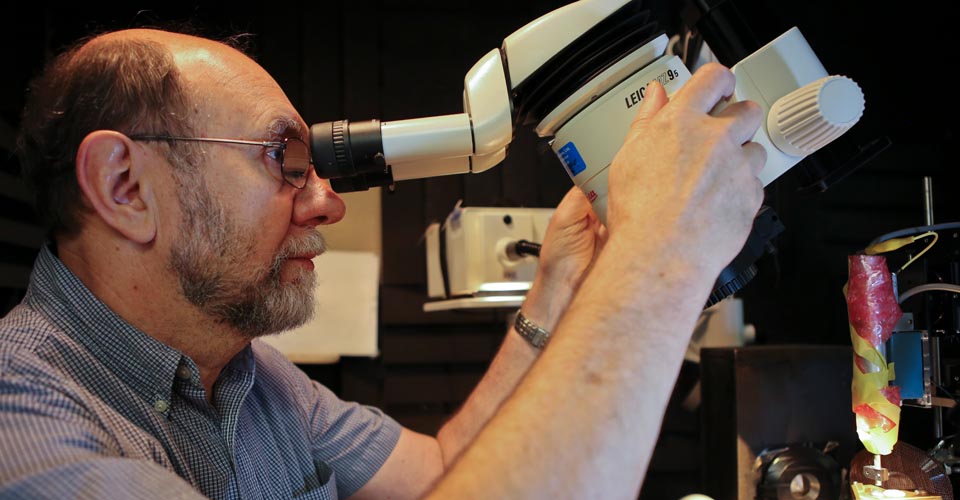 Imagine the sound of a mosquito buzzing in your ear, or a car horn honking nonstop. For people living with tinnitus—a ringing sensation caused by hyperactivity in the brain—such incessant noise is a frustrating reality often associated with anxiety and depression. Research by Alexander Galazyuk, Ph.D., associate professor in the Department of Anatomy and Neurobiology at NEOMED, is now in a pipeline to the marketplace, where it could lead to a quieter and more peaceful future for many.

The REDIzone® at NEOMED was established to facilitate collaborations among its researchers, private companies and entrepreneurs, such as R.K. Khosla. Elliot Reed, J.D., M.B.A., program manager and entrepreneur in residence at the REDIzone®, paired Khosla with Dr. Galazyuk as a means of supporting the transfer of Dr. Galazyuk’s discovery from the lab into a new commercial drug. Also guiding Dr. Galayzuk (pronounced GAH-lah-zhuk) on the steps toward commercialization is Maria Schimer, general counsel and chief technology transfer officer at NEOMED.

Although one in 10 people (including Khosla) live with tinnitus, also known as “The Devil’s Whisper,’’ no FDA-approved treatments exist, says Dr. Galazyuk, who works in NEOMED’s Hearing Research Group. “The process of finding a remedy for tinnitus has taken this long because every brain is different from another, making it hard to find one clear signature of the condition,” he explains. “Tinnitus is complicated to study because it affects more than just the auditory system. Many parts of the brain are hyperactive and affected as well.”

Not only is tinnitus deeply disruptive; it’s expensive. The Department of Defense spends about $2 billion each year on tinnitus compensation to veterans.

Tinnitus results from damage to the ear from exposure (whether steady or intermittent) to loud sounds—anything from hearing missiles explode in war zones to driving loud vehicles, like lawnmowers, or listening a rock concert without ear protection. After damage, reduced auditory information is sent to the brain, which compensates by turning “amplification” up, leading in turn to brain hyperactivity or elevated spontaneous activity. Such hyperactivity generates phantom sound sensation—the annoying noise of tinnitus.

More than 100 years ago, scientists discovered that after hearing a loud sound for about one minute, patients with tinnitus experience about one minute of quiet, known as residual inhibition of tinnitus. Using funding from the National Institutes of Health, Dr. Galazyuk and his team of graduate and post-doctoral student researchers have discovered a brain mechanism responsible for residual inhibition. This discovery helped them to replicate the phenomenon with a drug first developed by pharmaceutical company Eli Lilly.

Working Against the Clock

As a NEOMED employee, Dr. Galazyuk was required to disclose his discovery to the University when he realized he had discovered a non-obvious and novel use of the drug. A clock has been ticking since Galazyuk’s team filed a utility patent to that effect, establishing that Dr. Galazyuk would reposition the drug.  “It’s like driving a stake into the ground, establishing that we have an interest in developing this drug for a new use,’’ says Schimer.

The FDA requirements are tough. Fewer than one in a thousand new drug candidates obtain market clearance. But Dr. Galazyuk’s treatment has a substantial advantage, because it was already demonstrated to be safe in early (phase 1) clinical trials. Having passed the phase 1 human safety trials, the drug’s next test is phase 2 (known as proof of concept), which requires 20 to 30 people with tinnitus to be tested using varying doses of the drug. If that is successful, next comes phase 3: a clinical trial of between 3,000 and 5,000 people. Both phase 2 and phase 3 are expensive, costing millions to implement, which is why investors such as R.K. Khosla are so critical to the research process. Following successful results from phase 3, the drug would be submitted to the FDA for approval as a treatment for tinnitus.

As research continues, Khosla is researching potential drug manufacturers and places for clinical trials, per an agreement with NEOMED. This high-risk, high-reward project would pay off for the investor and NEOMED if the FDA approved it for its new, much-needed use.

Getting through phases 2 and 3 can take years: Consider the successful case of Gary Niehaus, Ph.D., a NEOMED researcher whose patent on a process to more quickly detect pathogens in food recently came to fruition, more than a dozen years after NEOMED’s first meetings with research partners at Kent State University. There’s still a long road ahead of Dr. Galazyuk and his team, but three years of trials doesn’t seem like much when you think about how long people with tinnitus have been waiting for the noise to stop.