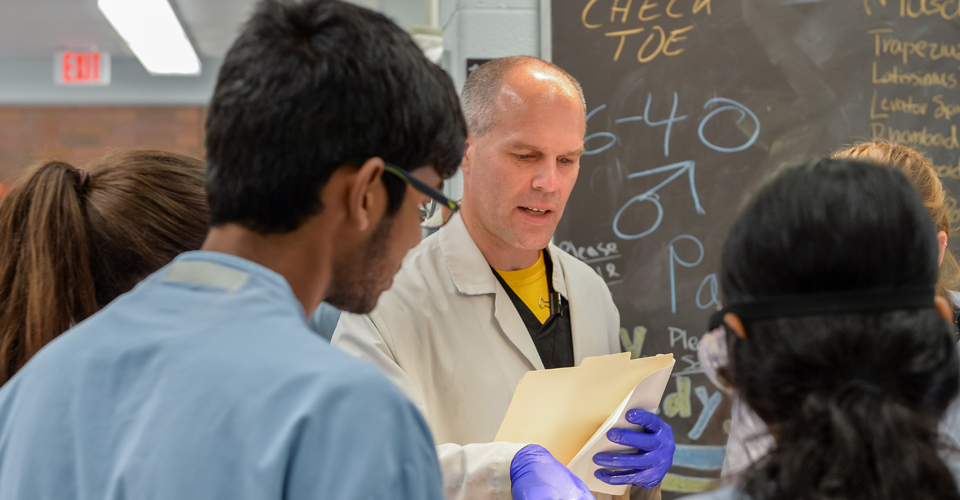 Sizing it Up: Unraveling the Genetic History of the World’s Biggest Mice

What could the evolution of the world’s biggest mice mean for the study of rapid size change and obesity in humans? Christopher Vinyard, Ph.D., professor of anatomy, is funded by the National Institutes of Health as a co-investigator to study Gough (rhymes with cough) Island mice—the world’s largest wild mice.

The mice on Gough Island were said to have been dropped off there by sailors 400 years ago. What’s special about them?

What drew you to this project?

As an evolutionary biologist, one of my main interests is how complex systems— systems that are more than the sum of their parts—evolve. The underlying genetic architecture of the things we see as the working parts of animals has always interested me. The Principal Investigator on this project, Bret Payseur, Ph.D., of the University of Wisconsin-Madison, and I have collaborated on a number of projects over the years, starting when we were in graduate school together at Northwestern. Bret is interested in genome evolution, and islands are great natural experiments. He came to me with the idea.

Finding the largest natural mouse in the world provides an interesting case study in how the skeleton and body size evolved so rapidly.

What are you hoping to learn?

For one, understanding the history of how the Gough mouse genome has changed. You would think oh, one gene changed and now you get a new something—but that tends not to be the case with things like size and body weight. Complex traits, like height or body size, typically have hundreds, if not thousands, of genes that influence their final form.

In fact, we see differences between the Gough Island and mainland mice all over the genome.

There are hundreds of genes with many interactions, each adding their own little part to create the continuous distribution of these complex traits in a population. If selection acts on body size or skeletal form, there are literally thousands of genes, each with some amount variation, that may be targets of evolutionary change contributing to increasing size in Gough mice.

All of this makes it very difficult to pinpoint where changes in the genome have occurred.  How that actually works is one of the biggest remaining questions in evolutionary biology: how do these complex traits evolve?

Another goal we have is to take a crack at one or two of these regions of the genome where Gough mice differ from mainland mice and see if we can identify the gene or genes affecting Gough morphology.  One of the objectives of our second grant is to start unraveling the genetics of one of these regions in the Gough mouse genome that suggests there may be an important size-affecting factor here. It’s a difficult and expensive process.

Funding from the National Institutes of Health for the “Genetics of the Island Rule’’ project was recently continued for Dr. Vinyard’s project. Read the full article, originally published in the Spring 2018 issue of  Ignite magazine.