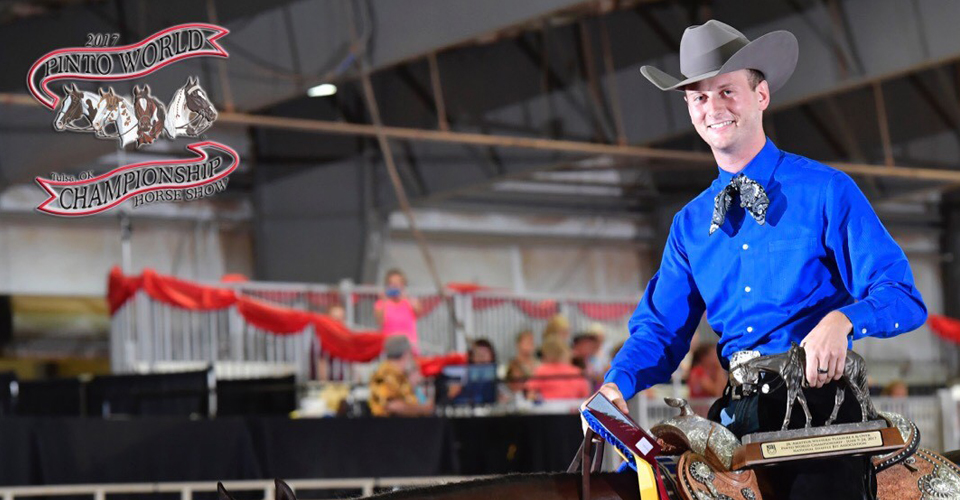 Solutions from the Stable: Cory Mathia

Is there time to horse around in pharmacy school? Cory Mathia thinks so. While balancing the College of Pharmacy’s rigorous curriculum, the third-year student is preparing to compete at the 2018 American Paint Horse World Championship Show in Fort Worth, Texas.

“I originally thought about veterinary medicine, but when I went through some my horses having injuries, I realized that stitches and medicine weren’t for me,” says Mathia. Instead, during a biochemistry course at Kent State University, Mathia discovered a passion that led him to NEOMED.

Now in his third year of pharmacy school, Mathia has taken a liking to ambulatory care pharmacy. He works alongside Jaclyn Boyle, Pharm.D. (’12), an assistant professor of pharmacy, as an intern in the hospital pharmacy at University Hospitals Portage Medical Center in Ravenna, Ohio.

“The thing that I like about ambulatory care pharmacy is that you’re able to work with the patient on a specific disease state, for example, diabetes. A patient can come in and you can check their glucose to see if they’re in range; if not, you can adjust their medication. I feel like you’re really able to make relationships with your patients and you’re able to figure out what their goals for their health are, then work with them to achieve those goals,” says Mathia.

Mathia has been showing horses competitively since soon after he got his first horse at age nine. Working with horses has shaped his character.

“There is definitely a correlation between caring for and showing horses and pharmacy school. I’d say the number one similarity is responsibility. It’s almost like having a child; the horses are dependent on you for everything, like feeding, exercise and cleaning up after them. There’s no wiggle room.

“There will always be some low points and failures, but there’s always successes as long as you just stick to it through the long haul. There’s a lot to being humble. There are times when you put your heart and effort into preparing and it goes the complete opposite way you dreamt,’’ says Mathia.

For the Texas show in September, Mathia and his horse Stuart will ride in Western-style all-around events, competing against riders from the U.S. and other countries. In case you’re unfamiliar with horse show events, Mathia can explain.

“The most common questions I get are ‘Do you race?’ and ‘Do you jump?’ I don’t do either one. For the events I compete in, the judges set a pattern ahead of time. You study the pattern, then you are judged on how you and your horse execute it; how you work together as a team; my posture; the horse’s attitude and willingness; and more,” says Mathia.

When Mathia isn’t trotting around arenas across the United States with Stuart, he dedicates his time to serving as special events chair of the Student Society of Health-System Pharmacists (SSHP); as a member of NEOMED Student Conduct Council; and as vice president of NEOMED’s new Veterinary Pharmacy Club – American College of Veterinary Pharmacists.

While the student organizations on campus provide plenty of opportunities to advance his education, Mathia notes it’s the faculty who truly makes his journey to a Pharm.D. achievable.

“NEOMED’s faculty members are so inspiring. The way that they reach out and genuinely have an interest in your future career is very exciting to me. As an undergrad, I never really had a mentor that took me under their wing, but here, I have multiple faculty members that I feel comfortable going to talk to,’’ says Mathia. “They are very interested in helping all of the students, which I really appreciate.”