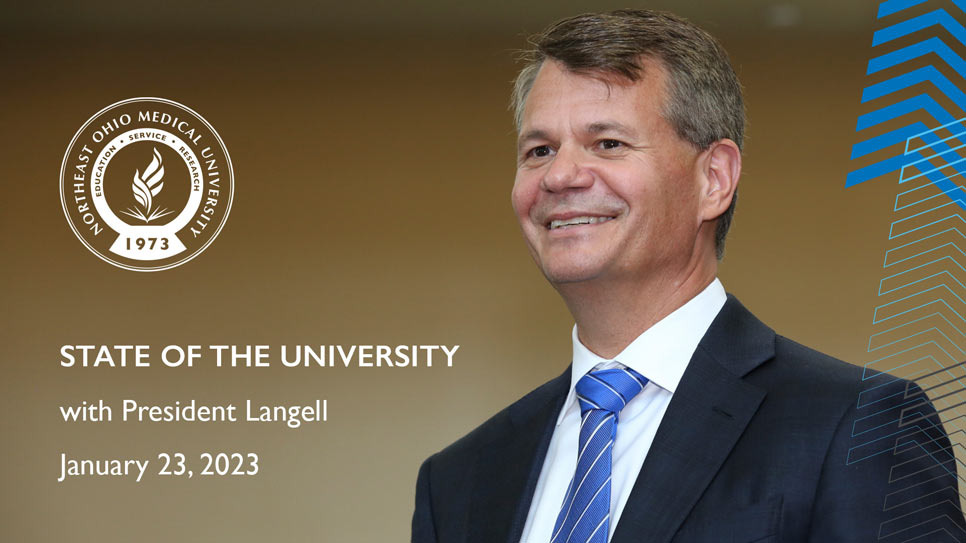 State of the University

In his first in-person State of the University address, President John Langell shared a look at the past, present and future of NEOMED on Jan. 23 in Watanakunakorn Auditorium and with a streaming audience joining the address via Zoom.

Noting that the University will celebrate is golden anniversary in 2023, Dr. Langell noted, “In 1973 our University was nothing more than an idea with limited state funding, no land, no assets and no employees…Since those early days, we have transformed NEOMED into a full standalone University, with now four Colleges, expanded to over 130 acres of land and experienced a 25-fold increase in student enrollment from the inaugural class of 39 to now well over 1,000 students and over 6,000 NEOMED graduates serving the community as doctors, pharmacists, research scientists and public health experts.”

Over the past few years, the University has achieved numerous accomplishments, beginning in 2020 with the launch of a new strategic plan. Among them:

Since the approval of the new Bitonte College of Dentistry by the Board of Trustees in September 2022, NEOMED has been raised more than $14 million for the new college. An inaugural dean, M. Frank Beck, D.D.S, FAAHD, and associate dean for dental education and academic affairs, Kristin Victoroff, D.D.S, Ph.D., have been hired to lead the College through its accreditation. The College is expected to welcome its first class of 50 dental students by August 2025.

Students across the University will benefit from increased focus on developing new clinical relationships and strengthening existing ones, including Akron Children’s Hospital, Summa Health Care, Altman, Mercy Bon Secour, and Cleveland Clinic, among others.

“And we have a powerful full-scale partnership with the University Hospitals that has already greatly expanded research opportunities and student rotations in the third and fourth years of medical school,” Dr. Langell noted.

Dr. Langell thanked Richard Kasmer, Pharm.D., J.D., who serves as dean of the College of Pharmacy and vice president for academic affairs, for “wearing two hats” and leading the University through HLC re-accreditation. He announced the University will be hiring a provost, who will lead academic affairs, enabling Dr. Kasmer to focus his attention on the College of Pharmacy.

“We will be bringing in a provost who will lead our academic programing at this University so that we can continue to have a harmonized growth of our Colleges working together for the betterment of all that we can attain in the future,” Dr. Langell said.

What else does the future hold for NEOMED?

“We are going to continue to grow our academic programing for high value, high reward programs and repurposing space through the Master Space Planning Committee to optimize the way we are structured at the University and where we are located,” Dr. Langell shared. “We're looking to create new student services, faculty resources and facilities for our staff and all to enjoy.”

The NEOMED community is encouraged to share their thoughts on the future of the University by responding to a series of surveys that will be distributed over the next several weeks.

Watch the video of the State of the University