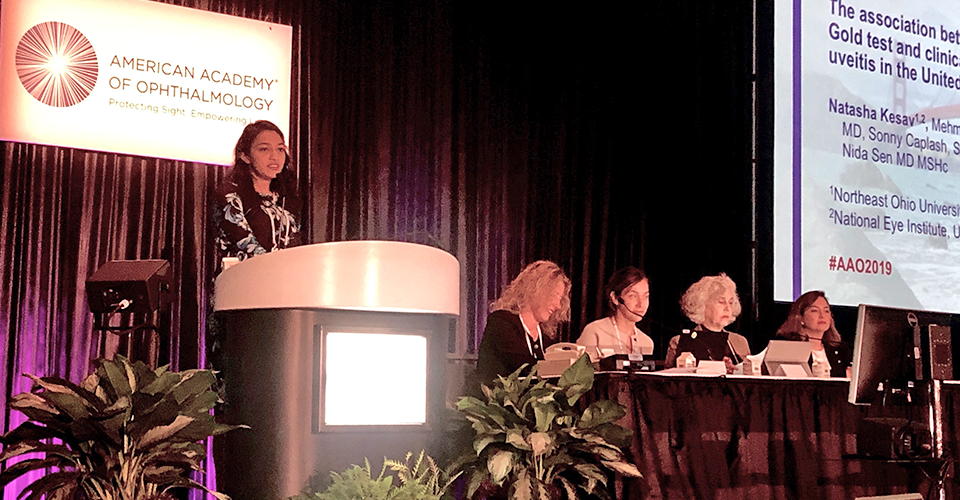 Congratulations to fourth-year College of Medicine student Natasha Kesav, who recently presented an original paper at the American Academy of Ophthalmology (AAO) annual meeting in San Francisco. The paper reported data from a study Kesav conducted at the National Eye Institute though the Medical Research Scholars Program (MRSP) at the National Institutes of Health (NIH) during the 2018-19 academic year.

Kesav opted for an enrichment year between her third and fourth years in the College of Medicine to live in the Washington, D.C. area and complete the one-year MRSP program.

Applications are open until January for the 2020-2021 cohort of student researchers in the NIH’s selective national program. Kesav welcomes College of Medicine students to contact her at nkesav@neomed.edu with any questions about the MRSP, and recommends the Committee for Student Clinical Research, led by fourth-year College of Medicine student Krish Dewan, as another resource for those interested in research.

Kesav says she attended the AAO meeting in San Francisco in October not only to present her work but also to learn more about the cutting edge in ophthalmology. It was inspiring to hear lectures in areas of artificial intelligence, vision rehabilitation and mobile health technology, she says.

At the AAO, Kesav also received a course pass where she practiced advanced surgical skills in a wet lab atmosphere led by the inventors themselves. Kesav says she particularly enjoyed lectures given by the Young Ophthalmologists (YO) and Women in Ophthalmology (WIC) committee leaders.

“Ultimately, everyone at the meeting wanted to make patient care better and more accessible, and for that reason I definitely plan on attending AAO again,” Kesav says.