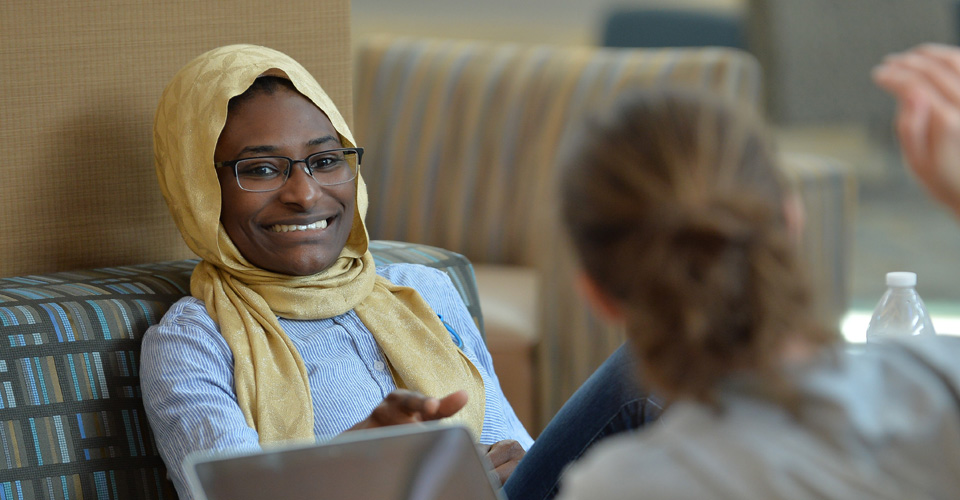 In this opioid epidemic, every medicine student must wonder: What would I do if I saw someone overdose?

At the Crain’s Health Forum at NEOMED earlier this summer, Joan Papp, M.D., announced a new Office of Opioid Safety at MetroHealth, which she directs. Maryam Audu, a third-year College of Medicine student, could never have imagined how soon she might need the training in administering naloxone (a medication to reverse the effects of opioids) that she received last week from Dr. Papp, a MetroHealth emergency medicine physician and founder of Project DAWN (Deaths Avoided with Naloxone).

Audu is a student in the NEOMED-CSU Partnership for Urban Health program. She worked as a nurse for two years before starting in the program and continued until last month, for a total of six years’ nursing experience.

The following article by Marian Lowes was published on the MetroHealth intranet and is reprinted with permission.

Maryam Audu is a third year medical student who recently began rotations in family medicine. Before med school, she was a nurse for six years. Her experience was far removed from emergency medicine, so when Melinda Ann (Mandy) Siciliano, Coordinator of Education for MEDTAPP, recommended a Project DAWN class, (Deaths Avoided With Naloxone), Maryam was eager to learn more.

Project DAWN is an opioid overdose education and naloxone distribution program, free to the public.

“I never saw an overdose, and figured I never would,” she says. “My experience was in an operating room setting, which is about as far away as you can get from emergency medicine.”

Last Friday morning, Maryam attended a session at the Cuyahoga County Board of Health in Parma, where she watched Dr. Joan Papp instruct participants on how to respond to an overdose.  Dr. Papp is an emergency medicine physician, nationally recognized authority on opioid abuse and Director of MetroHealth’s Office of Opioid Safety.

Still doubtful that she would ever use the kit that includes naloxone, the drug that reverses the effects of an overdose, Maryam said, “I was learning all the stuff, so I thought I should just take a kit.”

On her 15 minute drive back to MetroHealth Medical Center, Maryam thought it would be more likely that the naloxone would expire before she would ever have an opportunity to use it.

That assumption was wrong.

After parking her car and walking toward the towers’ entrance, Maryam noticed “a woman crumpled out of a car.”

“I ran up the ramp to help her while a nurse went for help,” she says. “I looked at her and saw she wasn’t breathing. I thought she might be having a heart attack, then the man who brought her said, ‘I don’t know what she took.’ "

“That was a lightbulb to me,” says Maryam, who quickly went into rescue mode.

Having just learned how to administer naloxone, she preceded to treat the woman.

Within minutes, the woman was responsive. "I would have been totally useless without that kit," says Maryam. "It was like divine intervention."

"This was an unbelievable moment for me. You never know when you will be put in the right place at the right time to help someone. I am grateful to Dr. Papp and for all she does to keep this program going."