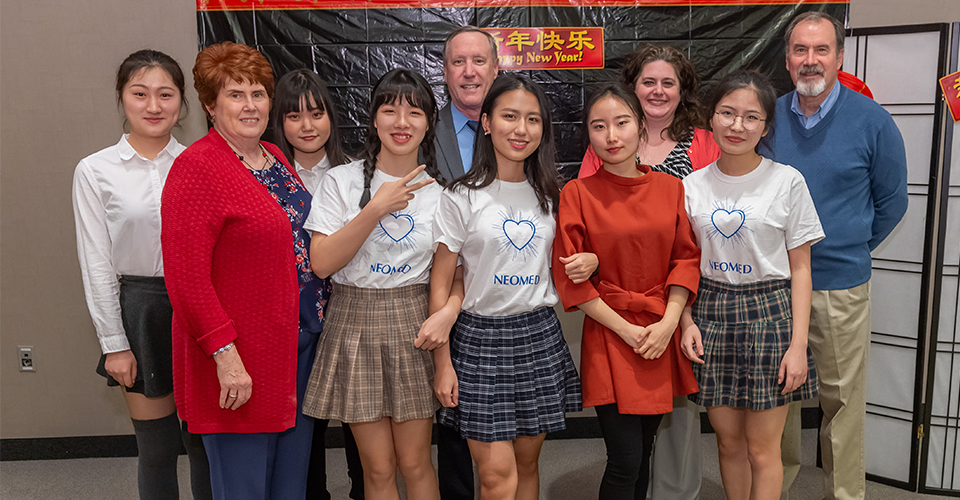 It’s the year of the pig! On the day following the official start of the 2019 Lunar New Year (according to the cycles of the moon) NEOMED students gathered to celebrate.

Lunar New Year is celebrated in the majority of Asian countries. Here at NEOMED, students threw a Lunar New Year party to “chase away ill fortune and invite in good luck,” says Katherine Wu, a second-year College of Medicine student.

This year, the holiday was celebrated on February 5 and observed at NEOMED Feb. 6, although in Chinese culture traditional celebrations usually begin 15 days prior.

Students visiting this academic year from Anhui Medical University (pictured above) in Hefei, China, performed a dance and song for the crowd.

A traditional lion dance was also performed by Wu, along with fellow second-year College of Medicine students Lydia Du and Nathan Dang, along with his older brother Matthew. The dance is said to bring good luck to businesses.

“We offered hibachi and sushi from Toko in Kent and bubble tea from Ming’s, also in Kent, as well as a variety of dried Asian snacks,” says Wu.

“These red envelopes are traditionally passed down from married couples and the elderly to singles and children and contain money that can ‘suppress evil spirits,’” Wu shares.