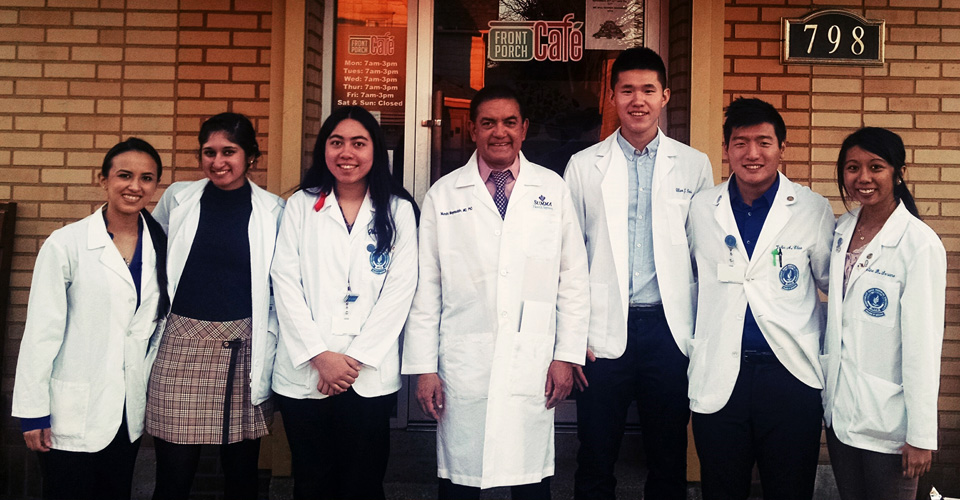 Students Work to Blast Hepatitis B

Inspired by the national chapter of its organization, a NEOMED student group is taking action to eradicate Hepatitis B.

The local chapter of the Asian Pacific American Medical Student Association (APAMSA) was founded by NEOMED students Elaine Kunzler, M3, and Anthony Dao (who recently graduated and became Dr. Anthony Dao) to raise awareness and education about the importance of screening for Hepatitis B.

The disease Hepatitis B, which can cause liver cancer is common in Asian populations. The APAMSA group decided to focus on Akron, due to its large population of refugees from Southeast Asian countries such as Bhutan and Myanmar. The screenings take place at the Front Porch Café, where South Street Ministries helps people who are homeless, previously incarcerated, and substance abusers.

“We chose Front Porch Café in Akron because it allowed us to serve a large amount of at-risk populations,” said Kunzler.

At so-called re-entry meetings, APAMSA students pass out information, guide individuals to private screenings and help counsel them from the Front Porch Café about Hepatitis B. Students cannot provide the screenings, due to strict guidelines and the need of a phlebotomy license, but partnerships with local doctors such as Susan Tucker, M.D. in internal medicine and a NEOMED alumna, help make that possible.

Dr. Tucker processes the samples taken from the café and gets in touch with the individuals to let them know the results. She also offers them free primary care services.

“Most individuals don’t have a cell phone and family members or sponsors have to be contacted to get in touch with them,” said Kunzler. “Dr. Tucker is familiar with the café and often goes there to find patients. We couldn’t do this without her.”

Munshi Moyenuddin, M.D., an infectious disease doctor for Summa Health, also volunteers his time and speaks at the meetings about the importance of getting screened.

Earlier this year, APAMSA students won a diversity initiative grant of $3,000 from NEOMED, which they use to help pay for the screenings. So far, three screenings have been held, with a fourth being planned to finish out the year.

“Although 90-100 people normally come to these events, not many people get screened,” said Kunzler. “Our goal is to have 40 people be screened at an event and to focus on health literacy.”

Now that Dao has graduated and Kunzler is busier on campus, she hopes to pass leadership of the club to first-and- second year medical students. Future goals for the club include reaching a larger population outside of Akron and possibly expanding to include Hepatitis C.