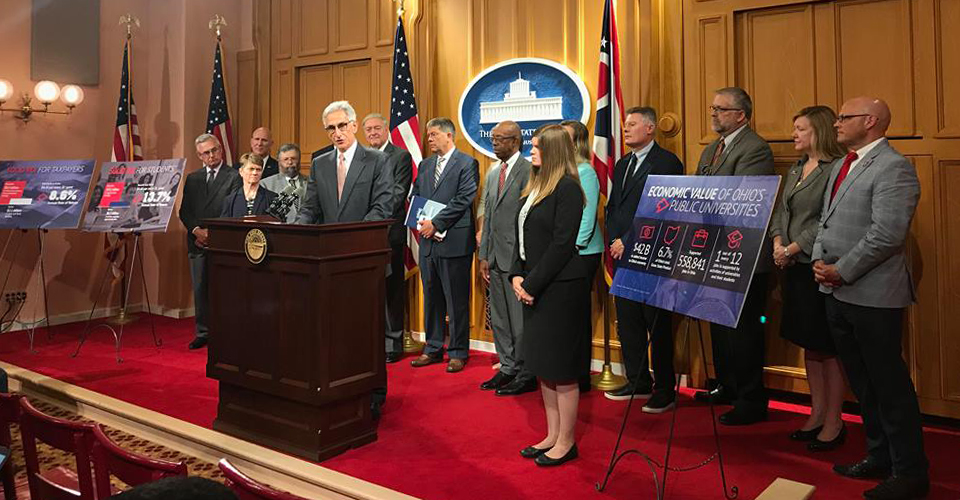 One in every 12 jobs in Ohio is supported by the activities of public universities and their students. Together, the state’s 14 public universities*, their students and their statewide alumni added $42 billion in income to the state economy in 2016-17.  Society as a whole benefits from money and time invested in Ohio universities, too: tax revenues are added, social costs are avoided, and an increased economic base is established.

Those were some of the key findings of an economic impact study announced Tuesday, June 12 in Columbus by the Inter-University Council of Ohio, chaired by President Gershen. The study confirms that by educating students, conducting research, and conducting day-to-day operations, Ohio’s public universities create significant ongoing impacts on the economies in which they operate. The study was a project of the Forward Ohio campaign by the state’s higher education leaders. President Gershen noted in a statement, “Today, Ohio faces a substantial gap between job requirements and worker skills and credentials. No entity will play a more important role in narrowing Ohio’s “talent gap” than our public universities. The study provides solid, quantifiable evidence of the value of Ohio’s public institutions of higher education, including the fact that they generate more tax dollars than they collect, which strengthens the rationale for supporting a robust system of public universities.’’

Value to students and to their communities

Higher education levels mean higher earnings, according to the analysis by EMSI, a leading provider of economic impact studies and labor market data. Career midpoint annual earnings for those achieving a professional degree is $121,700.

Today, hundreds of thousands of graduates of Ohio’s public universities are employed in the state. The accumulated impact of former students currently employed in the Ohio workforce amounts to $29.8 billion added to the Ohio economy, which is equivalent to supporting 391,675 jobs.

How the study was done

The study was conducted by Economic Modeling Specialists International (Emsi), a provider of economic impact studies. It used a specialized Multi-Regional Social Accounting Matrix (MR-SAM) model to calculate the added income created in the Ohio economy as a result of increased consumer spending and the added knowledge, skills, and abilities of students.  It drew on a wide array of data based on several sources, including the FY 2016-17 academic and financial reports from the public universities of Ohio; industry and employment data from the Bureau of Labor Statistics and Census Bureau; outputs of Emsi’s impact model and MR- SAM model; and a variety of published materials relating education to social behavior.