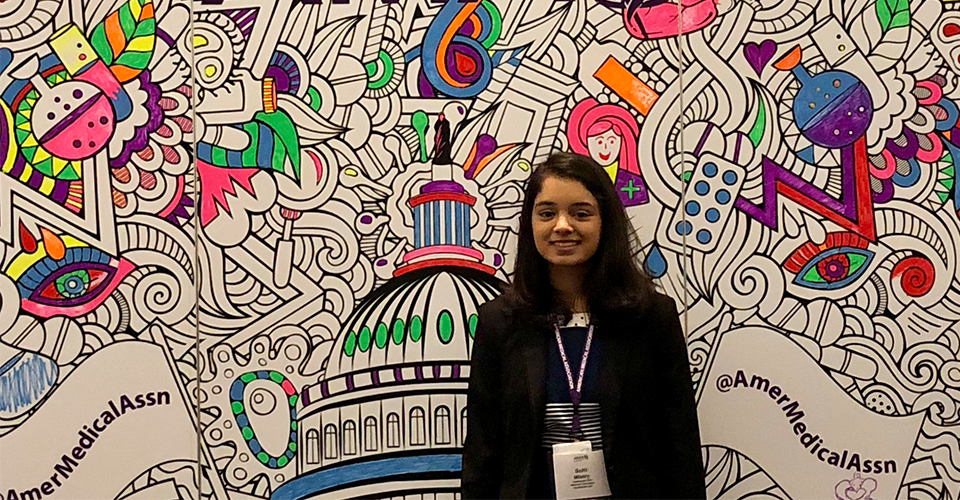 What started off as a Summer Research Fellowship Program project led first-year College of Medicine student Sohi Mistry to our nation’s capital this fall. Along with seven other NEOMED students, Mistry traveled to National Harbor, Maryland, to present research at the 2018 American Medical Association Research Symposium, held Friday, Nov. 9.

Looking for a connection

Mistry took an interest in the University’s Neurodegenerative Disease and Aging research focus area when she began to explore whether there is a correlation between the visual system and Alzheimer’s disease.

As part of Dr. Crish’s team, Mistry looked for biomarkers, such as amyloid beta and phosphorylated tau, in Alzheimer’s disease. “Those biomarkers affect the brain by forming plaques and tangles that endanger the areas of the brain that affect cognition and memory,” explains Mistry.

“A lot of research has shown that Alzheimer’s disease patients are often visually impaired. When we conducted visual screening on the mice, we found that the mice that have Alzheimer’s disease also have a visual deficit. We studied both the mice’s visual acuity and their actual pathology to determine whether we could detect Alzheimer’s disease before it progresses, based on clues from what was going on in their eyes.”

Showing off her studies

What was it like to wrap up the summer’s research by presenting it at the 2018 American Medical Association Research Symposium? “Really cool,” says Minstry, “and it was amazing to see what other students do.”

“Overall, it was a really good networking opportunity. If you use conferences like this to your advantage, they’re a great way to network and showcase your research.”