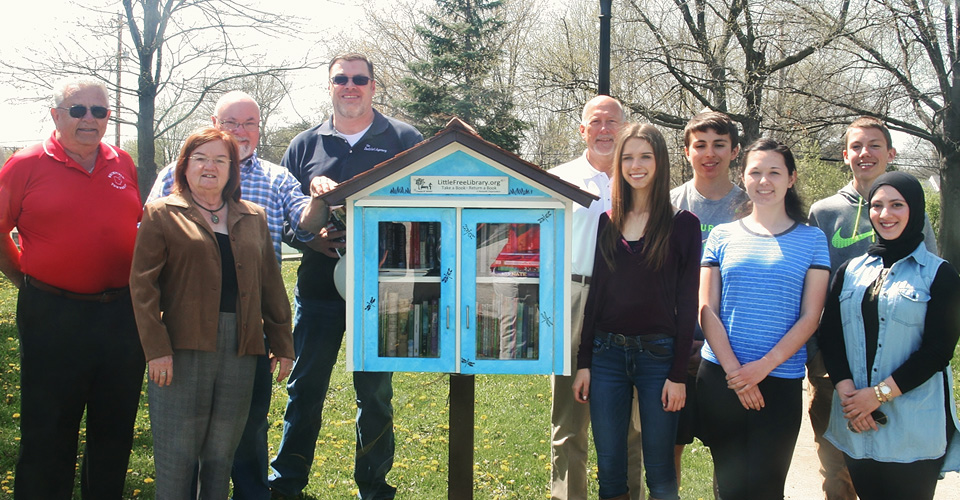 Take a Book, Return a Book

Imagine life without accessible literature. Impossible, right? An area without a library or access to reading material can put the community at a major disadvantage. Hailee Olson and her Field High School peers Brett Lowden, Sydney Kubitza, Baylee Morris, Miranda Evans, Missy Pedulla and Cory Fetterhoff saw the importance of literacy and wanted to implement it in their town of Brimfield, Ohio, as well as the neighboring town of Suffield.

Brimfield lost its library due to funding cuts in 2011 and Suffield has never had a library. Seeing that both of these towns lacked a facility for people to access free literature, the group decided to build Little Free Libraries for their Health Professions Affinity Community (HPAC) project. HPAC, a program started in 2012 by NEOMED’s Gina Weisblat, Ph.D., and Erik Porfeli, Ph.D., has been implemented in schools throughout Ohio—and beyond—to help solve issues in local communities. A Little Free Library is a small box in which people can exchange books. Its policy is simple: “Take a Book, Return a Book.”

“The goal of our project was to give citizens access to free books, promote literacy and build a sense of community through the sharing of books,” says Hailee Olson.

She and her fellow group members developed the idea by attending town hall meetings and getting approval from Brimfield and Suffield trustees. They also used community resources, something that HPAC encourages students to do. By holding book drives at churches and schools, working with the local Lions Club to build the boxes, and getting donations from Home Depot and Lowe’s, the group built two libraries, one for each town.

At the last Scholar’s Day, an annual HPAC event where students from throughout Ohio share their projects with the community, the group received an award for most sustainable project. After Scholar’s Day, the group was nominated for an award at the third annual Celebrate Portage! Dinner. Hailee Olson and Brett Lowden attended the event, which is held annually to celebrate achievements and promote good things happening in Portage County. The group won the Most Engaging High School Initiative award, which goes to a group that has implemented an innovative program to connect the school and community. They received a trophy and a letter signed by Governor John Kasich.

The seven students are moving on to another community issue and project for the current academic year, but they have arranged for stewards to maintain the mini-libraries and continue circulating books.  If their new project is as successful as their little libraries, they will be a true example of successful HPAC students in action!